During the annual FreedomFest summit last week, outspoken economist Peter Schiff touted a bold prediction about the future of the U.S. stock market. 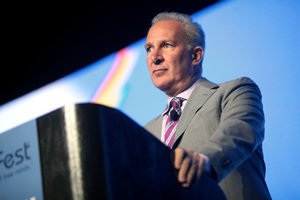 According to Schiff, corporate stock buybacks are terrible for the markets – and shareholders.

"I think share buybacks are going to come back to bite us," said Schiff. "I don't like companies that are buying back their stock."

Schiff has been saying the same thing for years.

Indeed, in 2014, Schiff warned Yahoo Finance that "shareholder value was being destroyed."

All the while, the markets keep climbing, and we've been making you money…

And even if Schiff is right this year, the worst decision you can make is to get out of the markets.

Schiff May Have a Point, but It Doesn't Matter

Money Morning Chief Investment Strategist Keith Fitz-Gerald, who also spoke on the panel, agreed that corporate buybacks aren't the best thing – but he also said that it doesn't matter, at least not in the short term.

Who's Right About the Markets, the Bulls or the Bears?

"If that creates profits for you – and you’re managing your risk appropriately in the interim – does it matter?"

You see, Keith understands that you can’t build wealth if you don't stay in the markets, even when the "perma-bears" are telling you to get out.

In fact, Keith sees one factor that is going to keep pushing the markets even higher: liquidity.

Liquidity is the term used to describe how easy it is to convert assets to cash.

Here's why it's so important…