Another drop in oil prices and a sharp sell-off in Chinese stocks both contributed to the growing stock market crash fears on Friday. 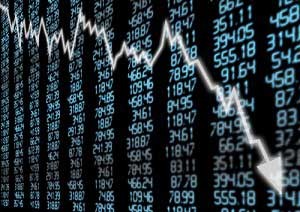 The weak reports reinforced fears of economic growth in Q4. Economists forecast the U.S. economy grew just 1% or less in Q4. We had been seeing average growth near 2% during the six-and-a-half-year recovery.

Adding to the stock market crash angst Friday was the steep decline in Asian stocks. China's Shanghai Composite Index closed down 3.6% to enter bear-market territory, having lost 20% from a high in late December.

Money Morning Technical Trading Specialist D.R. Barton told FOX Business News this week the decline in stocks has been a measured move, and we could linger down here for a while. Barton added we shouldn't be surprised to see the Dow test lows near 15,370.

Here's what investors need to know now about a potential 2016 stock market crash, including how to protect your money…

We warned investors earlier this week that markets were on shaky ground when we highlighted the recent dismal data from the manufacturing sector.

You see, when an economy is heading towards recession, bleak data from the manufacturing sector typically signals the start.

And the manufacturing sector has been contracting for months. The latest readings indicate the worst manufacturing climate since March 2009, just as the economy was clawing its way out the depths of the Great Recession.

Money Morning Global Credit Strategist Michael Lewitt has been warning readers about these troubling signs in the markets for months.

8611 Reads
The Best Penny Stocks to Own Right Now – 185% Profit Potential
The best penny stocks to own are the highest reward for the lowest risk. And there are preferably a lot of insiders buying up shares in good faith. Then I can trust the high analyst projections - like the 185% growth target on our top penny stock today.