The eurozone's woes are giving us a preview of what could eventually happen in the United States (but not before Europe is engulfed first). As fears of sovereign debt crisis mount, the debt "contagion" spreads. It is not just Greece that has investors afraid, but Portugal. And Spain... and Italy... and so on.

The problem is classic, and long ago highlighted by Austrian economics. Building up a lot of debt, to make a slightly crass analogy, is like putting on a bunch of weight. It's hard work getting the debt off - the same as it is taking weight off.

The way to lose weight is to eat right and exercise. The way to get out of debt is to cut back on spending and increase productivity.

But when an economy is already weak and sick, it's very hard, if not impossible, to cut back on spending easily... just as it's very hard for an obese person to put in vigorous exercise when they are ill.

This is why IMF "austerity measures" have proven so disastrous in the past. To lose weight (or debt), you need vigorous exercise (or spending cuts). But when you are sick, you need the opposite thing - rest and nourishment. Exercise is no good for a sick man. It only makes him sicker.

And so, asking a country like Greece to clamp down harshly on spending, even as their economy reels, is like asking a heavyset man with mild pneumonia and fluid in his lungs to start running five miles a day. Harsh cutbacks at the wrong time become a recipe for collapse.

This extends back to the central failing of Keynesian economics. Keynesians argue with gusto that government should act as a counterbalance to the free market economy, spending in hard times and saving in good times to keep things balanced.

This sounds reasonable in theory. In the real world, though, the government only gets half the equation right. It never saves in the good times. It only spends, spends, spends.

And so Keynesian economies inevitably find themselves in the most vulnerable position... indebted and sick at the same time.

If you can understand this, you can understand why Europe's problems are not going away . Investors are beginning to realize, with horror, just how sick the various eurozone countries really are. And that sickness will make it very hard, if not impossible, for these countries to address their looming debt issues without descending into political unrest... or collapsing into economic depression.

Take Spain, for example. Recent reports put Spanish unemployment above 20%. Youth unemployment in Spain is reaching civil unrest levels, with the jobless rate for under-25s above 40%.

What investors must face, now, is the prospect of yawning black holes when it comes to sovereign debt. As former IMF economist Simon Johnson wrote last week,

The nightmare for Europe is not at this point about Greece or Portugal - it is all about Italian and Spanish bond yields ... The yields for Spain - for example - are rising because hitherto inattentive investors, who always thought these bonds were nearly as safe as cash, suddenly realize there are reasonable scenarios where those bonds could fall sharply in value or even possibly default.

So now we have a situation where faith in eurozone debt is rapidly crumbling . Investors are losing their taste for holding these bonds - and the fear is contagious.

And here's where the problem takes a familiar turn. Guess who has the most exposure to potentially toxic eurozone debt?

Once again, it's the banks.

Why France Freaked Out

The following chart from Spiegel shows why French President Nicolas Sarkozy is so desperate to have Greece bailed out.

French banks have massive exposure to Greek debt - more than 75 billion dollars' worth. As a country, France is the single largest creditor to Greece. (The yellow slice of the pie labeled "andere" means "other," and includes multiple countries.) 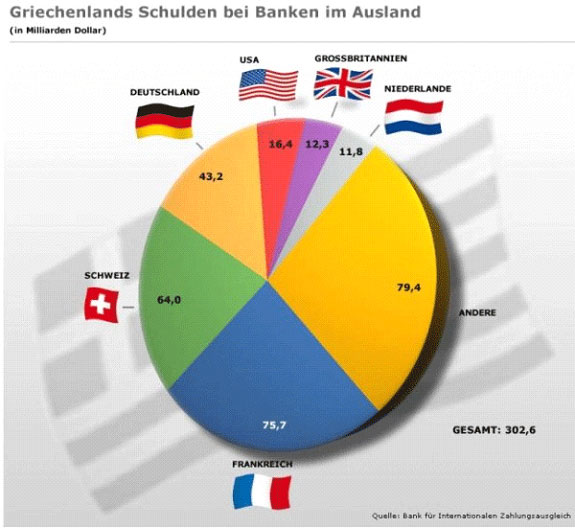 And remember, too, that Greece is just the beginning. Fears are mounting as to the solvency and credibility of all sovereign debt issues. Spain alone - a country whose debt got downgraded by Standard & Poor's last week - is roughly five times bigger than Greece in GDP terms. And Italy is half again as large versus Spain.

Nor is this just a problem for Europeans. In terms of sheer size, guess which two banks have more exposure to eurozone sovereign debt than any other? (Hint: Both of them have "Morgan" in their name.)

As Bloomberg recently reported (emphasis mine),

JPMorgan Chase & Co., the second- biggest U.S. bank by assets, has a larger exposure than any of its peers to Portugal, Italy, Ireland, Greece and Spain, according to Wells Fargo & Co...

What that means, basically, is that JPMorgan has the biggest trade on in absolute dollar terms, but Morgan Stanley has the biggest exposure relative to the size of its trading account.

But Justice doesn't stop there. If you like what you're reading, sign up to get his latest on financial market trends and investment commentary delivered right to your inbox

Here is the bottom line:

In the Fall of 2007, Britain saw its first full-on "bank run" in more than a century. Northern Rock, a troubled British bank knee-deep in mortgages, had lost the confidence of its depositors. As fears mounted, Northern Rock bank branches saw long lines of customers desperate to pull out their cash, like the classic runs of 100 years ago.

If the eurozone debt situation continues to spiral downward, we could see the same dynamic once again - but with "sovereign" replacing subprime, as depositors all across Europe wonder just how much trouble their savings accounts might be in.

The irreplaceable element, the sine qua non, of all fractional reserve banking regimes is confidence. Banks routinely balance huge balance sheet positions on tiny slivers of capital. They can only do this as long as confidence in the system is strong. When confidence ebbs away, the result can be deadly.

Approaching the Point of No Return?

To make matters worse, Europe is still in denial as to the seriousness of this problem.

There is such a strong focus on "containing" the problem - keeping it to just Greece - that vital preparations are not being made for Plan "B"... what happens when panic spreads beyond Greece.

Call it risk management at its worst... or head-in-the-sand politics at its best. Fervent hope that the problem will not grow bigger has replaced realistic preparation as to what should be done if it does.

We have already touched on parallels to Lehman Brothers, the touchstone of the global financial crisis, and further to the Northern Rock bank run and escalating subprime fears of 2007.

But in some ways the strongest parallel of all stretches 18 years back - all the way to 1992 - and it gives a strong hint as to just how this whole thing could be resolved. Stay tuned...