Gold investors are a happy bunch. Those with the luck or foresight to have boarded the golden railroad back in 2001 have experienced a fivefold investment in the "metal of kings." That works out to compounded return of better than 20% a year.

Such a torrid performance has evoked claims that this is just another financial bubble - that's soon to burst.

But the reality is that anyone who classifies this bull market in gold to be nothing more than a bubble simply hasn't looked at the market fundamentals, doesn't understand them, or has an ulterior motive.

Precious metals - and gold in particular - have been the asset class of the decade. But it's not too late to climb aboard - there's still plenty more growth to come.

I've got a high degree of confidence in my prediction. And with good reason: After years of covering the gold, commodities, and mining sectors, my research and observations all indicate higher gold prices for years to come.

Indeed, there are four specific trends that promise to keep gold prices on an upward trajectory. I'm referring to the fact that:

Let's look at each of these four catalysts.

In the past two years alone the U.S. Federal Reserve, the European Union (EU), and central banks in China, Japan and a host of other nations have chosen to "stimulate" their economies by ramping up spending and cranking up their printing presses. Multi-trillions of dollars of liquidity have been injected into the global economy. 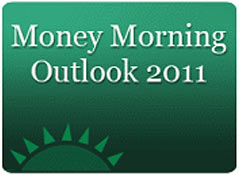 That's going to lead to inflation. It already has in the "volatile" food and energy segments that the U.S. government conveniently leaves out of its twisted consumer price index (CPI) numbers.

The U.S. central bank's $600 billion "QE2" initiative will fail to boost the economy and/or lower unemployment in any meaningful way. Instead, that "hot money" is making its way to emerging-market economies, where it's being plowed into hard-asset resources such as gold.

Even so, if there's one likelihood we can rely on, it's that U.S. Federal Reserve Chairman Ben S. Bernanke will continue to do the one thing that he seems to excel at - printing money. As the reality of an ineffective QE2 sets in, there will be cries for a QE3, which will also fail to produce the desired results. That will force a QE4, then a QE5 and ... well, you get the picture.

Eventually, inflation will take hold like a virulent virus - and will be just as hard to halt. The omniscient Fed's plan is to just raise interest rates to tame inflation and mop up the massive liquidity. But our central bankers are likely to be taken by surprise and end up moving too late.

A severe loss of confidence in the greenback could push bond prices lower and cause yields to soar virtually overnight, beating Bernanke and company to the draw. And a badly weakened U.S. dollar will devastate millions of savers.

If this doesn't scare you, consider this: At its current pace, every 18 days, the U.S. government issues debt equal in value to a full year of gold production. Every year, the United States borrows the equivalent of a full one third of all the gold ever mined.

Despite record nominal gold prices, gold miners just can't crank out enough of the stuff. Between 1997 and 2001, miners "high-graded" (mined ore with the highest grades) just to keep the lights on, as gold prices bottomed and the yellow metal was reaching the peak of its secular bear run.

Ever since, as gold prices have steadily climbed, these miners have been shifting production to gradually lower grade ore, leading to ever-lower output. In fact, in just the past five years, the average recovered grade has declined a full 30% - dropping from 1.8 grams per ton down to 1.3 grams per ton.

And the grades of replacement ore being found are now averaging about 0.60 grams per ton, meaning twice as much ore has to be found just to replace gold being produced at current grades. Gold has become so valuable that millions of tons of what was formerly considered waste rock are now being recategorized as gold reserves.

Economic theory tells us that as demand increases, so does supply, which helps to contain prices. In the case of gold, however, that just isn't happening. There's simply not enough new gold being found to replace consumed reserves and to allow for higher production levels.

Over the past year, gold production has only managed a 3.0% increase, despite a 20% increase in price.

Chindia (China and India) - with 35% of the world's population - has turned into a big fan of gold. India is the world's largest gold consumer. Last year, Indians bought just under 500 tons. Already in the first nine months this year, 2009's full-year sales have been surpassed. China, too, is on pace to better last year's consumption levels.

For its part, Indian demand for gold jewelry is expected to increase by about 11% this year.

Worldwide, investment demand for gold will be up, led by China, India, Russia, and Turkey. "Bar hoarding" is on the rise, too, increasing 44% over 2009 as investors increasingly take physical delivery of their merchandise, reports the World Gold Council. In fact, net retail investments in this year's third quarter set a record at $9.6 billion - a staggering 60% increase over the same quarter in 2009.

Refusing to be left behind, jewelry and industrial demand have also posted year-over-year third-quarter increases of 8% and 13%, respectively.

What's particularly fascinating, though, is the level of buying also driven by central banks, mostly in the Middle East and Asia. In the past year, we've seen India, Sri Lanka, and the Republic of Mauritius buy a total of 212 tons of International Monetary Fund (IMF) gold at $1,050 per ounce, followed by Bangladesh, which purchased 10 tons at $1,275 per ounce.

Russia absorbed a full 63% of its own 2009 production, amounting to 130 tons. Even Iran announced that it is converting $45 billion into a mix of euros and gold. In fact, a smaller (unnamed) Mideast nation has indicated that it is converting 200,000 barrels per day of oil production into gold, the annualized equivalent of 140 tons of gold yearly at the current oil-to-gold ratio.

I could give you a whole song and dance on this point, but I really don't need to. As it currently stands, the average investor, both retail and institutional, is sorely under-invested in gold-related holdings.

As the accompanying graphic shows, just after the gold prices hit their peak in their last secular bull run, gold and gold-mining shares represented 26% of global assets. In 2009, investment levels in these same subsectors represented a microscopic 0.80% of global assets. Clearly, gold has a long way to go just to become a significant allocation within the average portfolio.

So if you've been asking yourself that burning question: "Is gold in a bubble?" - rest assured that the answer is still a resounding "No!"

Actions to Take: With gold prices projected to hit $1,900 an ounce by the close of 2011 - and as much as $5,000 or more an ounce over the long haul, gold should be in virtually every investor's portfolio. Let's look at several areas to focus on.

Gold Miners: If you want some leverage on the price of gold, then one of the preferred ways is to own a group of elite gold miners. One simple vehicle to gain this kind of exposure is through shares of the Market Vectors Gold Miners exchange-traded fund (ETF) (NYSE: GDX). Gold-mining powerhouses Barrick Gold Corp. (NYSE: ABX), Goldcorp Inc. (NYSE: GG), Newmont Mining Corp. (NYSE: NEM), and AngloGold Ashanti Ltd. (NYSE ADR: AU) account for nearly 50% of the current weighting.

It's important to note that gold stocks typically offer an average leverage ratio of about 2:1 on the performance of the price of gold. On a five-year basis, gold shares have lagged, but in the two years since the 2008 stock-market panic, they've been delivering that 2:1 return. On a longer-term basis, the ratio still sits about 20% below the level that would reflect a two-for-one leverage, a "limited-time offer" I expect will not last.

Contract Drillers: An indirect way to play this sector is via the classic "pick-and-shovel" approach, in which my network of industry sources has provided me with some impressive internal numbers. Junior miners - those that typically focus on new or expanding discoveries - are estimated to have increased their exploration budgets some 60% over 2009. That places specialized contract drillers in a particularly sweet spot. As demand for their services swell, expanding their profit margins, their stock prices could truly soar over the next few calendar quarters. And I believe the bull market in these shares is likely to last even longer than that. I have one such holding in my Global Resource Alert advisory service that's up 80% in a bit more than a year. For more information on the Global Resource Alert, please click here.

[Editor's Note: Peter Krauth, a frequent contributor to Money Morning, is the editor of the Global Resource Alert, a private advisory service that focuses on precious metals, energy commodities and other natural-resource-related topics. Krauth spent two decades as a market analyst and portfolio advisor, and has covered all the commodities sectors, including gold, silver, coal, alternative energy and agriculture. He even makes his home in Canada - to be closer to the action. And several of his recent predictions have generated a genuine Internet buzz.

To find out more about commodities, or the Global Resource Alert, please click here.]

Thank you Money Morning for your excellent and valuable information! I believe your position pertaing to "The King's Metal". I have my own facts to support yours. Everywhere you look jewelers, pawn shops and middle men just getting into the gold business are looking for people's gold! These merchants aren't paying top dollar for this precious metal either! People are in a financial crisis and have turned to their jewelry for cash, which gets resold at a much higher cost, or melted down, unless pawned and retrieved. You mentioned there is a shortage of gold in the mines and a lower grade of ore is being unearthed. Hmmm. Very interesting! Somebody knows something! Furthermore, if as you predicted for the end of 2011, gold will be sold at close to two thousand dollars per ounce, then Wow! The dollar must have truly lost its value and the economic forsight for the masses seems very gloomy! If the masses have no cash money or gold, it appears the ultimate goal is the enslavement of the people. Better listen to you and turn to the Higher Source! As for me, I've always wanted a top of the line metal detector. The mother load is out there waiting to be discovered. If I can't find her, perhaps I can find some of her babies!

Yeah, what he said.

So what do you think is going to happen now that the Central Banks would not even accept gold from Cyprus to fund the bailout. They are being forced to sell sell it, convert to fiat currency and then be accepted. How do you anticipate this slap to the integrity of gold as a currency to play out now that Gold is under $1,400 at this moment.