International coal prices hit $124 per ton last week, the highest level in five months, as strong demand from reconstruction projects in Japan and reduced supply from flood-ravaged Australia have made coal supply tight.

The floods in Queensland, Australia cut the country's output of coal by 15%; other big coal producers such as Indonesia, South Africa and Colombia are experiencing similar production cuts due to floods of their own.

At the end of March, coal prices were 33% higher than a year ago, and earlier this month mining giant Xstrata PLC (PINK: XSRAF) inked a one-year deal with a Japanese utility at $130 per ton, effectively setting a floor under coal prices in the near-term. That's up from $98 per ton the company made in a similar deal a year ago.

Perhaps no country is more affected by this development than China.

With its economy powering ahead with 9.7% gross domestic product (GDP) growth during the first quarter, Chinese electricity use was up 13.4% on a year-over-year basis over the same time period, according to China's National Energy Association (NEA). China's overall electricity consumption is now expected to rise 12% this year, up from the 9% growth that the NEA forecasted in January.

China's Electricity Council said the country might face power shortages of 30 million kilowatts during the summer, so the government has moved quickly to put restrictions in place as the peak season approaches. Big industrial provinces such as Guangdong and Zhejiang already are scaling back power consumption. These reductions are likely to hinder aluminum, cement, zinc and steel output, according to Macquarie Commodities Research.

Coal powers the Chinese economy. The country is the world's largest consumer, gobbling up nearly half of the world's coal consumption in 2009. Coal accounted for 71% of China's energy in 2008-more than three times the United States' share. The Electricity Council estimates that the country's coal demand will reach 1.92 billion tons in 2011, up nearly 10% from 2010. 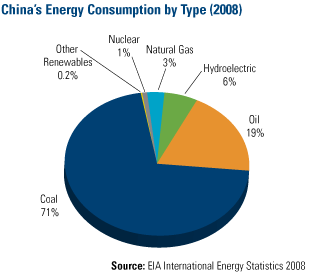 China hasn't always been such a glutton for coal. In fact, coal consumption actually declined from 1996 to 2000. However, consumption has shot up 180% since then and China accounted for 80% of demand growth between 1990 and 2010, according to BP PLC (NYSE ADR: BP).

This is because demand for electricity exploded over that time. China's rapid urbanization and rising middle class has led to an exponential number of new refrigerators, air conditioners and other appliances in homes.

Luckily for China, it sits atop the third-largest amount of recoverable coal reserves in the world behind the United States and Russia. The country ramped up its coal production from 645.9 million tons of oil equivalent in 1999 to 1.552 billion tons in 2009. Despite this increase, production couldn't keep up and the country became a net importer of coal in 2009. Production jumped over 15% during 2010 but the country was still forced to increase coal imports by 42% in order to meet demand, according to the China Daily.

There are two types of coal: thermal and metallurgical. Thermal coal is burned in furnaces to create electricity. Metallurgical coal - also called coking coal - is used to create concrete and steel. China's coal reserves are light on the latter, which has required China to rely on countries such as Australia, Indonesia and Russia for supply.

These imports are playing a vital role in China's infrastructure boom.

The U.S. Energy Information Administration (EIA) estimates that Australia's total exports to Asia, which also includes Japan and India, will increase 64% to 394 million tons by 2035. This accounts for 94% of Australia's total exports. Coal exports from Indonesia, Asia's second-largest source of coal, are expected to rise 26% over the same time period, according to the EIA. In 2009, China signed a 25-year, $6 billion loan-for-coal agreement with Russia that will supply the country with 15 to 20 million tons of coal.

The Chinese government made it clear that it wants to wean the country's power grid from coal. That's proven to be a difficult task. China's 12th Five Year Plan calls for big improvements in energy efficiency and the development of additional sources, including natural gas.

Massive projects such as the Three Gorges Dam have sought to increase capacity of alternatives, but hydroelectric, nuclear and other renewables combined make up only 10% of total power. In addition, low water levels due to a drought in Southern China have reduced current hydroelectric capacity.

The ongoing disaster at the Fukushima nuclear plant in Japan has delayed but not squashed China's nuclear ambitions. The country has plans to build more than two-dozen plants by 2020, accounting for 40% of new nuclear facilities around the globe.

Only time will tell if the effort will be successful. The EIA forecasts that China's power generation from coal will increase by 2035 but will account for only 62% of total power generation by then. However, the EIA says that absolute coal consumption will nearly double as the economy continues to grow and electricity demand remains strong.

Michael Ding and Xian Liang, analysts for the China Region Fund (USCOX), contributed to this commentary.