Among the most eagerly awaited results will be the financial earnings, many of which are still struggling to fully recover from the 2008-2009 financial collapse.

According to Zacks Investment Research, J.P. Morgan will earn $1.14 a share versus just 90 cents in the final quarter of 2011.

Other financial earnings winners projected by Zacks include:

Of course, life isn't totally golden for all the financials. A few are expected to release less-than-stellar results.

The point is, the mixed projections reflect the fact there's still a lot of uncertainty surrounding the outlook for the financials.

Even those with good numbers this time could face storm clouds ahead.

For starters, J.P. Morgan, Citigroup, Wells Fargo and BofA, along with Ally Financial Inc., all face future hits thanks to the $25 billion settlement reached in February regarding foreclosures and malfeasance in handling mortgages left worthless by the housing crisis.

J.P. Morgan must also pay new federal penalties as a result of a settlement last week in the civil suit over actions it took that helped lead to the collapse of Lehman Brothers in 2008.

On the other hand, Wells Fargo, JPM, BAC and many others could get a significant boost from the new and improved version of the Home Affordable Refinance Program (HARP 2.0) adopted last month.

So, given all this, how can you hope to profit from any move in the financial stocks in the wake of their upcoming earnings releases?

Obviously, simply buying the stocks ahead of the reports is not the answer.

There's too much cost, too much risk.

Just ask folks who held Bank of America this time last year, when terrible earnings - and a host of other negatives - triggered a slide that carried the share price from around $14 down to just $4.98.

But, with only two weeks of life left, the April 44 JPM call is still priced at $1.24, meaning it would cost you $124 for each full option contract purchased - all of which you'd lose if the earnings disappointed and the stock fell below $44 a share at the April 20 expiration.

The same cost and risk factors would apply if you expected an earnings disappointment and purchased put options to play an expected JPM price drop.

That's why, when I expect that some news event or corporate report could result in a sizable stock price move, but I'm uncertain whether it will be up or down, I prefer to use an option combination strategy.

In this case, for example, I might try what's known as a "short iron condor."

I know that sounds like a silly name for an investment strategy, but option plays are full of such names - butterflies, straddles, strangles, ladders and the like.

Of course, the name's not really as relevant as how the strategy, which involves four different options, actually works.

To implement it, you:

Using J.P. Morgan, with its current stock price at $44.34, as an example, you might buy one April 45 JPM call and sell one April 47 call, while simultaneously buying one April 43 JPM put and selling one April 41 put.

You can, of course, do multiple contracts, so long as you always buy and sell the same number of calls and puts.

Also, because the long options "cover" the short options you sell, there's no added margin requirement for this trade.

The trade also has an absolute maximum profit - which should, if properly positioned, equal 140% to 150% of the maximum risk.

Those numbers sound fairly small, but remember, we're looking at a trade with a life of just two weeks and one that requires only a modest move in the underlying stock price to reach maximum profit - likely in the wake of any earnings surprise.

Plus, you profit regardless of which way the stock moves - i.e., whether the earnings surprise is positive or negative.

To clarify, the accompanying table shows all the possible results for a short JPM iron condor done at the prices available at last week's market close, the stock trading at $44.34. 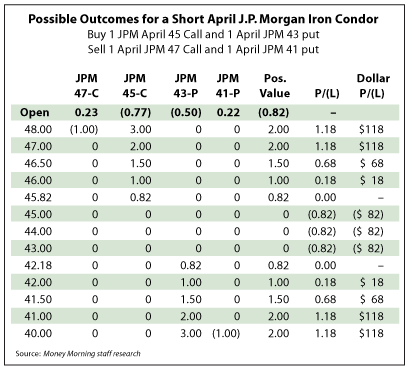 As you can quickly see, if JPM's price fails to react to the earnings release and remains between $43 and $45 a share - the strike prices of the two options you purchase - the trade will suffer the maximum loss of $82. It breaks even at either $45.82 or $42.18, depending on which way the stock moves.

The short iron condor looks like a complicated trade, but it's really not - and it can be highly effective in producing healthy short-term gains with a minimum of cost and risk when you're expecting a good-sized price move but aren't sure whether it will be up or down.

One caveat on timing: If you want to play one of the financials that's releasing earnings after J.P. Morgan, you'll need to use the May option contracts since you'll want at least a week or two for the stock to move following the report.

You can always close the position prior to the expiration date, taking slightly less than the maximum gain, if you get a profitable move in just a few days.

Neil The condors are a more complex strategy and it can easily be confused. Here is a rule you can use to determine long or short a position for any strategy: if you are (buying) seeing a debit to your trading account when you place a trade or spread you are long the position and if you are (selling) seeing a credit to your account it is considered a short position

@Neil: The strategy described by the author Larry D. Spears is indeed called "Short Iron Condor". You can see a definition of this strategy at http://www.trade-stock-option.com/short-iron-condor.html

Good article explaining clearly how to apply short iron condor strategy to a real world situation. Thank you, Mr. Spears, for giving us a nice idea to ponder. I'm considering making this trade as you recommend. If I make money, do I have to split it with you ;-)

Agree with TRAN.. Mr. Spears, nice idea to ponder. For completeness, would you complete the example with respect to closing out the position, say next Tuesday (April 17) if the JPM stock price was $38.00. Specifically curious how the 41 put would be closed.