If he only knew.

Then again, as one of America's famous humorists and social commentators, I suspect he "knew" all too well that history rarely works out the way people think.

As capital markets liberalized and the Internet Age began in earnest it was a time of great hope.

Companies that had very little other than a ".com" after their name suddenly became worth hundreds of millions of dollars. Boo.com, Pets.com, and Kozmo.com are a few that come to mind.

But were any of them worthy of all the hype?

I was one of the few who didn't think so. Many people considered me a Luddite because of it.

I wasn't trying to be difficult. I just reasoned that when everybody "knew something" that the end was near.

How did I know?

Well I didn't...exactly. But, I had a good idea thanks to something my grandmother, Mimi, used to call the "country club" test.

After being widowed at a young age Mimi was a seasoned, successful global investor in her own right. She reasoned that when an investment or a trend began making the rounds over drinks, it was time to move on.

And if she heard something around the poker table, she'd actually bet in the other direction.

One day, I asked what her secret was.

In no uncertain terms she told me to look carefully at the world around me and, in particular, at magazine covers.

According to Mimi, they were the next best thing to a crystal ball. Because whatever is all over the covers is what's on top of the mind on the cocktail circuit -- not to mention fodder for the masses...who are usually wrong.

Frankly, I thought Mimi had consumed one too many martinis. She loved them. Then, as my own career progressed, I began putting two and two together. 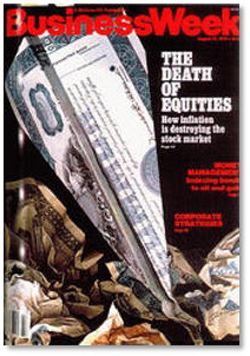 It turns out it wasn't the gin talking. Mimi was right.

Magazine Covers and the Stock Market

I've never forgotten Mimi's advice and still study magazine covers intently to this day because they help me latch on to important market shifts and trends that others either miss or simply don't see coming.

I am not so much interested in the stories themselves as I am in reading into the implications of headline copy. Many times I find out that what's being said in the headline isn't as important as what's being left unsaid.

For example, do you remember this magazine cover touting the "death of equities" from Business Week's August 13, 1979 edition?

It missed the mark by a wide margin. It turns out the markets weren't down for the count after all. 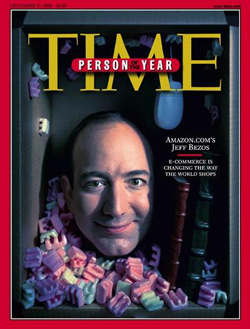 Or how about this one from Time Magazine that crowned Amazon's CEO, Jeff Bezos, as Man of The Year in 1999?

New economy or not, that one seemed over the top to me. Within 24 months, the Internet bubble had burst and shares of Amazon (Nasdaq: AMZN) closed below $6 shedding 94.32% from its high of $105.06.

Many people were also convinced that oil was dead money in 2003 when the price of a barrel had fallen to between $20 and $30 a barrel. Then I saw this from The Economist in October of that year and had a hunch otherwise. 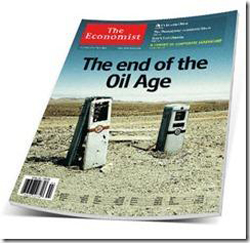 One of my more recent favorites is this little gem from New York magazine last February. The cover touts the emasculation of Wall Street.

Ostensibly it is a bearish story. But I don't know if I've ever seen a more bullish contrarian indicator.

Obviously no magazine cover is infallible - nor am I - but the truth is a lot closer than many of us care to admit. 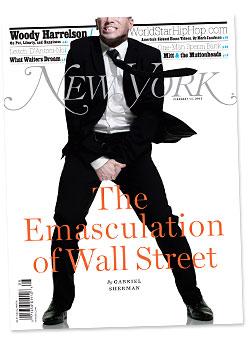 Mimi said this is because we all love a good story even if it quite literally isn't in our best interests.

Hardly. Three finance professors from the University of Richmond proved it in 2007.

Examining stories over a 20-year period in Business Week, Forbes and Fortune, Professors Tom Arnold, John Earl and David North found that companies that had received positive coverage but did not make the cover outperformed their benchmarks by 42.7% while companies receiving negative coverage underperformed by 34.6%.

Once a company hit the cover, though, the professors found that outperformance fell to a mere 4.2% suggesting that any company making the cover may have topped out. They also found that negative cover stories tended to be published near bottoms or turnarounds.

The moral of the story is if a company makes a popular magazine but not the cover, there's upside. But if it hits the cover as a media darling, odds are good that it's tapped out.

Conversely, if a company is negatively portrayed inside a magazine, it's likely to be treated negatively by the markets. But if it's negatively handled on the cover of a popular magazine, you may have a great turnaround candidate.

So what do several of the most popular magazines suggest now?

Forbes is running a cover story entitled: ObamaCare Billionaire: What One Entrepreneur's Rise Says About The Future of Medicine. I'd be very nervous if I were Neil Patterson, the CEO of Cerner Corp (Nasdaq: CERN), the world's largest standalone health care IT system maker and the one profiled in this particular issue.

Patterson has had a helluva run over the last 33 years and with ObamaCare now under the microscope, things could change in a real hurry. Cerner handles over 150 million health care transactions a day, representing a super opportunity and potentially the greatest single concentrated privacy risk in the world at the same time.

Time's cover story is about the Top 100 Most Influential People in the World. My guess is that half of them won't be in a few short years.

For example, Christine Lagarde, Managing Director of the International Monetary Fund, may go down as one of the greatest failures in monetary history if the EU comes apart on her watch. Rihanna, a wildly popular pop star today doesn't appear to be writing the kind of music on par with the Beatles, the Stones or Madonna. And Tim Cook, who took over for the late Steve Jobs, may wreck Apple despite his early successes. Time will literally tell.

Fortune's cover headline is "The United States of Natural Gas". It's really three stories in one, all of which are about energy.

The first, about Exxon, notes that the fracking party may have just begun. The second highlights a coming energy revolution thanks to fracking and deep-sea drilling. The third suggests that fracking could crowd out wind and solar.

This suggests to me that fracking, which is under tremendous social pressure, may not be what everybody thinks it's cracked up to be - pardon the pun. Social pressure is building against it; water pollution and drying aquifers may be the real story...as a result of fracking.

The Economist notes that The Third Industrial Revolution - i.e., digital manufacturing -- will transform the way goods are made and change the politics of jobs, too. This is a little more nuanced but I think it speaks to the fact that, while jobs may change thanks to technology, there will be a resurgence in plain old-fashioned manufacturing. Much of it, ironically, is going to come from offshore as bankrupt state and local governments bend over backwards to attract a tax base (and jobs).

Strangely...nobody has a Facebook cover on the rack at my local Barnes & Noble right now.

And that makes me wonder if the company's larger-than-life $100 billion IPO is going to hit the magazine rack just in time to signal its own irrelevance.

That wouldn't surprise me one bit under the circumstances.

The story of Granma Mimi reminds me of something I heard told many years ago. It was the summer of '29. Joe Kennedy was sitting at a bootblack stand on Wall Street. The bootblack was telling him of all these hot tips he was hearing. So, Joe was sitting there listening, and thought to himself, "If this guy knows more than I do about the Market, it might be just time to get out of it." So, Joe went off and started selling out for cash. Summer of '29, folks. Wake up and smell the 'shweet violets'.

In the summer of 1929, Joe Kennedy had boatloads of bootleg whiskey out on Lake Erie, headed south from Canada, with manifests for Cuba, that never got beyond Buffalo, Erie and Cleveland. He needed more $ to fund this trade, so he sold up his shares and bought more fast boats and cases of Canadian Club. Nobody wants to admit it, but this is how the great Kennedy clan became America's new Royal Family by 1960. President Roosevelt had him to thank for much Democratic Party funding in 1932; so FDR rewarded Joe Kennedy "he's a son-of-a-bitch; (but he's our son-of-a-bitch)" by appointing him first as SEC Chairman, in 1935; then as Ambassador to the Court of St. James (London) in 1939; just in time for Kennedy to corner the Scottish Whiskey export trade to the USA as the Nazi U-Boats encircled the North Sea. Nearly 2 years of that monopoly made Joe as rich as Rockefeller; maybe even richer, by November 1940. Then he was recalled to Washington, as no longer in tune with FDR as the USA & UK became ever closer before America joined the war; also Kennedy was both anti-British and anti-semitic. Joe Kennedy's chummy relationship with neutral, Nazi leaning, Republic of Ireland and his attempts to meet Hitler became the unbearable and untenable last straw to FDR. There is an old Irish legend that whoever deals in liquor will suffer tragedy for 3 generations after; certainly true of the Joseph P. Kennedy family: Joe, one of America's ugliest 20th Century "benefactors".

That's a great story, Benton. It reminds me, too, of the "Tulip Mania" craze of 1600s Holland, or "The South Sea Bubble" of England not long after (which even clipped Sir Isaac Newton … ironic that the discoverer of gravity didn't realize that stocks that go up, can also come down).

Thank you for sharing your story. Like you say, the media truly can be a reliable precursor of the contrary. Whatever the "news" on the cover (be it positive or negative), the "news" in its infancy most likely made the rounds on the inside first. In other words, the "news" had been percolating gradually on the inside until it reached its inevitable zenith by appearing on the cover. At which time it became "old news".