There's a story about a king in India.

He asks the royal leather worker to cover his kingdom in leather, so wherever he walks, he will never stub his toes.

The leather worker pauses and then suggests to the king that if he covered his feet in leather he could walk wherever he chose, anywhere in the world.

This is the story about the first pair of shoes.

It's emblematic of the way many people look at renewable energy. Right now we are trying to cover the world with solar panels or wind turbines.

But what if we decided to look at the world as its own solar panel?

I'm talking about geothermal power and the good news is we already have the technology to tap into it.

MIT estimates that just 2% of the heat below the United States at depths of 3-10 kilometers would be enough to supply 2,500 times the nation's current energy needs.

The compelling part about geothermal energy is that it isn't as cost-intensive as solar or wind. It's also far more reliable - available 24 hours a day, 7 days a week at consistent, predictable levels.

That means more geothermal energy can be uploaded to the grid far more efficiently and on a larger scale than either solar or wind.

This technology is also proven and is already in commercial and industrial use west of the Mississippi and for residential applications around the globe.

And now, there are two factors that have the potential to put this clean energy resource on a level far beyond its previously limited scope.

Geothermal Power for Your Home

There are two types of geothermal that work off the same underlying principle.

Residential geothermal - the kind you would run a house on, uses the "earth-as-solar panel" concept.

In this case, geothermal heat pumps take advantage of the solar energy stored just below the surface of the ground.

If you're a solar power fan, then consider this a passive solar unit because the earth is a highly efficient photovoltaic panel: 40% - 60% of the Sun's energy is directly absorbed into the ground.

In cold months the pump pulls the heat from the earth and heats your house. Residual heat is used to heat your water.

Conversely, in the summer months the heat is pulled from the house and pumped into the earth loop where it dissipates into the earth and the cool solution in the pipes acts as a refrigerant.

This video from GeoSystems does a good job of giving you an overview of the process.

Believe it or not, with geothermal energy, you can cut your heating and cooling bills by 70% and have virtually free hot water whether you live in southern Florida or northern Minnesota.

In fact, its potential for residential use is so strong both the Department of Energy and the Environmental Protection Agency have dubbed individual geothermal as "the heating system of the 21st Century."

It uses the heat in the earth's core to generate electricity much in the same way that hydroelectric power sources are used to run cities.

Whereas residential geothermal uses the differential between surface temperature and Earth's stable temperature found 100 feet below the surface, industrial geothermal drills down two miles or more to tap into the heat in the earth's mantle.

It works by bringing up the natural steam found at those depths to the surface, where it powers a turbine and generates electricity. 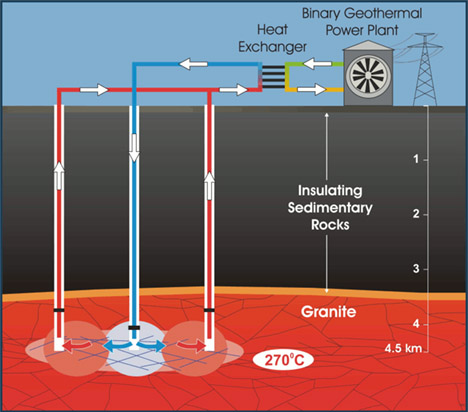 Right now, most industrial geothermal operations are located around "The Ring of Fire" or the tectonic plates that comprise the U.S. West Coast and the coast of Asia on the other side of the Pacific.

Up to now this resource has been tapped at relatively shallow depths where it was easy to access geothermal energy near the surface.

For example, the Geysers in northern California contain a set of 22 fields run by Calpine Corp. (NYSE: CPN) and represents about one-third of all geothermal energy production in the world.

U.S. Geothermal Power and Beyond

The new developments that are changing the face of geothermal are:

1. New Drilling Technologies: These new methods are allowing access to fields that were inaccessible before. The new technologies that oil and gas drillers have been developing to access super-deepwater reserves, and horizontal drilling and unconventional methods to access shale deposits now mean that geothermal isn't restricted to conventional "near-surface" sources.

For example, the New Madrid tectonic plate that runs down the Mississippi River runs too deep for conventional drilling to access. But now, with new technology these types of plates and fields can be tapped.

2. Repurposing Old Projects: Again, thanks to efforts by the oil and gas industry and the scientists they employ, a new source, or more accurately an old source, for new geothermal has been discovered, or re-discovered. Or repurposed.

In this case, the U.S. Department of Energy spent approximately $180 million some two decades ago looking into the thermal energy that exists at the bottom of some abandoned oil and gas wells.

They focused their efforts in Texas because there were 1 million-plus abandoned oil and gas wells with reservoirs of hot brine or hot sea water, down about two miles. That sea water also contains residual amounts of natural gas.

Using that research, companies have recently returned to see if they could get that hot brine to come up those abandoned well bores and make electricity with newer technologies, that flash off the natural gas, make steam to create turbine electricity. Finally, they use the thermal energy from that brine to make electricity again in an organic rank and cycle type of engine.

And now there are a few companies that are looking at harvesting this energy in a practical, commercial way.

One of them is Greenwell Power Corporation. This Canadian-based company is planning to tap abandoned wells and generate electricity from the hot brine and from flashing off the gas using conventional mobile turbines.

Their first project, slated for late spring 2013 with the first wells in the San Antonio region and along the coast, is expected to generate 3 megawatts of energy from each well. The broader plans include approximately 75 wells each one 3 MW of power.

This one is worth watching since it means any abandoned well can be repurposed and doesn't need to rely on deep drilling or tectonics. In short, its geothermal power that can pop up anywhere there's a rig.

As far as publically traded companies, the big players to look at include: Calpine, Ormat Technologies (NYSE: ORA), and NV Energy Inc. (NYSE: NVE). Meanwhile, on the Asian side, Primary Energy Corporation (PENGF) currently has three projects in the Philippines.

Well, you got it half right, or maybe 2/3. There is indeed a huge amount of thermal energy below our feet, as the MIT report indicated. It's also true that geothermal power is a fairly cost-effective technology when there's an existing underground reservoir of either hot water or steam that can be readily tapped for energy … the heat transfers to the water or steam, providing an easy way to transport that heat to the surface.

Unfortunately, such underground reservoirs are fairly rare. So, to tap the heat that lies beneath most of our feet requires a technology quite similar to the fracking technology currently being used to tap natural gas and oil. I think fracking was actually developed for this purpose, but unfortunately, it's more difficult to use in the hot, typically hard rock that exists in geothermal hot spots. So technology to exploit the heat beneath our feet&emdash;called "hot dry rock" technology by some, "enhanced geothermal systems" by others&emdash;hasn't really been successful to date. There are some projects in Australia that are trying to make it work, but they've had their share of drilling problems. The bottom line, though, is that this technology will NOT be cheap, at least not anytime in the future.