Coming less than a year after Google unveiled its Google Glass Web-connected eyeglasses, reports that an Apple "iWatch" is in the works emphatically confirm that the battle is now joined for dominance over the next wave of tech - wearable computing.

According to the reports, Apple Inc. (Nasdaq: AAPL) has 100 people working on an iWatch users would wear on their wrists, but that would have many of the same capabilities as an iPhone.

But wearable computers could enable new uses, particularly in the area of healthcare, while perhaps providing the spark to encourage some promising technologies that have yet to catch on, like contactless payments.

Four of the biggest names in tech - Apple, Google Inc. (Nasdaq: GOOG), Sony Corp. (NYSE ADR: SNE) and Microsoft Corp. (Nasdaq: MSFT) - either are selling, have announced, or are known to be working on wearable computing ideas.

And two other big names, Amazon.com (Nasdaq: AMZN) and Facebook Inc. (Nasdaq: FB), are watching for opportunities to benefit from yet another major shift in how people interact with technology.

"Computing has evolved from the mainframe to the desktop to the shoulder bag to the pocket, and now computing is taking over new frontiers: Our physical bodies and the physical environments we inhabit," wrote Forrester analyst Sarah Rotman Epps in a blog post.

Just as the rise of touch screens and mobile computing drove Apple to the top of the tech mountain, any tech company that gains the upper hand in wearable computing could become the new king.

The Magic of Apple iWatch and Google Glass Technology

One major reason wearable computing is only now becoming a big deal is that until recently the technology didn't exist to make it feasible.

For example, the iWatch reportedly will use a special kind of curved glass called "Willow Glass." Developed over 10 years by Corning Inc. (NYSE: GLW), Willow Glass can bend as easily as a piece of paper.

Other advances make it possible to build the bendable electronics Apple would need to put behind the curved glass of the iWatch. 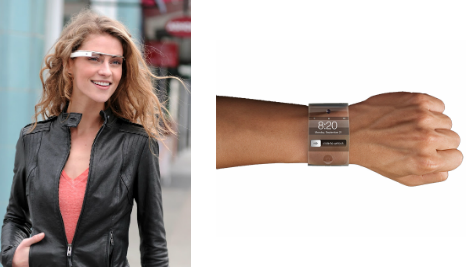 Apple's rumored iWatch is grabbing headlines today, but Google Glass has "first mover" advantage in the field of wearable computing - and not just in headgear. Last year Google filed patents for a wristwatch-like computing device that has a flip-up display screen.

A tiny startup called Imprint Energy has developed just the sort of thin, flexible battery an iWatch would require. Based on zinc, Imprint's battery is actually safer and more powerful than the lithium batteries that power most mobile devices today.

Likewise, breakthroughs in the miniaturization of displays made the tiny display required for Google Glass possible, not to mention the electronics required to power it. The project team is also working on a contact lens version of Google Glass.

And more is on the way: International Business Machines Corp. (NYSE: IBM) announced just last week that it had created experimental flexible chip wafers that could bend as needed to accommodate future wearable computing designs.

Wearable Computing: Where the Race Stands

With most of the major tech companies racing to build the dominant wearable computing platform, it's too early to predict a winner.

But here's where each of the three primary contenders stand now:

With all of these companies (and others) already working on projects, wearable computing will rush into the mainstream even faster than mobile computing did.

Something like an iWatch from Apple, though, would jump-start the process.

"Apple, like every other consumer electronics company out there, is trying to figure out the next big thing," Paul Saffo, head of foresight at Discern Analytics, told MarketWatch. "The next big thing may be a bunch of little things. What do you do after you have a laptop, a smartphone and a tablet? You accessorize."

>>For more on wearable technology, check out Google Glasses Prove the Future is Already Here.

>>Don't miss Chief Investment Strategist Keith Fitz-Gerald on FOX Business this week, answering What Should Apple Do With Its $137 Billion Stockpile of Cash?

I think that this new project on youtube,but will complicate the struggle between,GOOGLE,APPLE and MICROSOFT

Most of these watches are doomed for failure. It doesn't matter how elegant the OS is, or how responsive the touchscreen is, or even how vibrant the display is. Each time you touch the screen you black out a huge portion of display. Can you imagine if you have an oversized hand. Guess what most men do. A possible solution would be the pointing device from Crucialtec. How else would they do it?