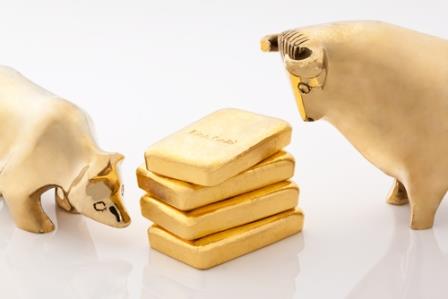 Bloomberg also reported that assets in global exchange-traded funds backed by gold fell to 1,715.8 metric tons on May 22, the lowest since Oct. 2, 2009.

Signs of economic improvement in the United States and hopes of a more politically stable Ukraine have both taken some of the shine off safe-haven asset gold. Stocks have been hitting record highs in recent weeks.

Other reasons weighing on gold are a stronger U.S. dollar, support levels encouraging traders to short the yellow metal, and lower demand from China.

Investors around the globe are watching the Indian gold markets closely because of recently eased import rules in India. The Reserve Bank of India (RBI) announced it will allow seven more agencies to commence gold importing, setting prices to drop drastically to $50 to $60 in the spot market, according to The Economic Times. The decline marked the biggest drop in a session in gold price per ounce since 2013, when the RBI imposed an eighty-twenty rule in which 20% of imported gold had to be exported by nominated agencies.

Business Standard also reported on the drop, stating that the RBI's announcement of relaxed importing rules caused the Mumbai spot market to crash. Spot gold premium dropped from $80 an ounce to $20 an ounce from May 21 to May 22.

Despite the short-term drop, investors remain hopeful that India's new policy will make it cheaper for Indian investors and jewelers to buy gold and will spark pent-up demand. Additionally, they're hopeful it will support prices globally.

"I think [gold] could show a huge comeback, depending on how the [new Indian government] policy shapes up," P.R. Somasundaram, managing director at the WGC's India office, told The Wall Street Journal.

So far, the international price for gold has remained relatively steady after the RBI's policy news. And that's a good sign for gold investors…

How to Play Gold Now