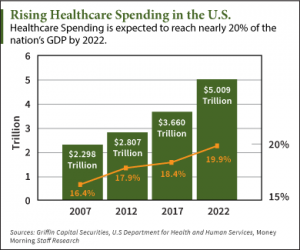 Google (Nasdaq: GOOG, GOOGL) has made history with its Internet innovation - but now it's about to leave the same mark on another industry...

You see, GOOG knows the healthcare sector is one of the fastest-growing markets today. Healthcare is a $2.8 trillion-a-year industry in the United States alone. 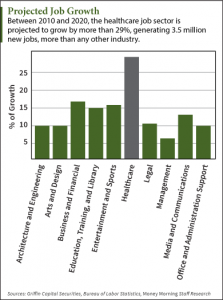 On a global scale, Freedonia group researchers estimate the value of the health industry at $10.8 trillion a year by 2017.

Venture capital firms see the potential. In just the first six months of 2014, VC funding for healthcare tech firms shot up 176% to a record $2.3 billion, according to a survey by seed funding firm Rock Health. That compares to the $2 billion invested in all of 2013.

It's no wonder Google sees opportunity here. And the search engine king's Big Data capabilities mean it has a lot to offer.

Google Ventures Gives Healthcare Startups a Shot in the Arm

Google's investment arm, Google Ventures, invests about $1.5 billion in promising startups. One of its main focuses is on health and Big Data. Ventures currently has 13 American life science and health companies in its portfolio, plus other healthcare-related investments in seed, enterprise, and data startups. In July, Ventures launched a $100 million fund to invest in promising European startups.

"My job is kind of a judge at a science fair," Google Ventures managing partner Bill Maris said to Re/code in June. "What we try to put into our practice is 'invest in what we know,' which is where healthcare meets technology. In some sense, almost all companies these days need to be big data companies."

Science tech startup DNAnexus is one recipient of Google Ventures funds. It received $15 million in 2011, and then another $15 million in series C venture funding earlier this year.

DNAnexus seeks to understand how genetics affect heart disease and aging. It specializes in a cloud-based DNA sequencing service that works through human genomic data. By joining forces with Google, it developed a new interface that lets researchers efficiently browse datasets and download the sequences they need.

In May, Google Ventures led a $130 million round of funding in Flatiron Health. According to The Wall Street Journal, the round was the fourth-largest investment Google Ventures has made to date and its largest in medical software.

"Cancer will likely touch all of us at some point in our lifetimes, either as a patient or as the family or friend of a patient. Flatiron has pioneered a way to learn much more about cancer, so that we can improve the way we care for patients and treat the disease," Google Ventures general partner Dr. Krishna Yeshwant said in a statement.

Google's healthcare enterprise doesn't stop at venture funding - the company has its own life-changing work in-house as well...

Google's new venture with the health care industry will be a great time for the company and also the people. Google is not only becoming wiser but also healthier!!