Gold prices will go up, and for the most basic of reasons: supply and demand.

Yet that isn't a factor you hear much about in the financial media. When most pundits talk about what moves gold prices, they usually focus on international turmoil, the direction of the global economy, and the bad habits of central banks.

So most of them have completely missed a trend that will push gold prices to $2,500 and beyond over the next few years.

In short, we're running out of gold. 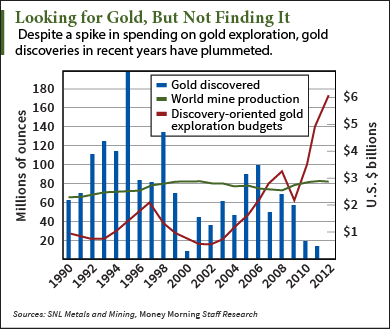 Take a look at this chart. It shows the amount of gold discovered each year (the bars), the price of gold, and worldwide gold mine production.

The blue bars show how the amount of gold discovered has fallen sharply since 2009, and it's not a one-year anomaly.

Nor is it for lack of trying. In fact, gold exploration budgets soared to record heights along with gold prices from 2009 to 2012. And still the gold miners made fewer and fewer discoveries. (Yet the mine production amount has remained steady – more on that later).

"A lot of the low-hanging fruit – deposits that are easier to find – have been picked," said Money Morning Resource Specialist Peter Krauth, a 20-year commodity guru and portfolio advisor. "Companies looking for gold have to go farther, drill even deeper, and look in places that are increasingly geopolitically challenged."

But it gets worse. 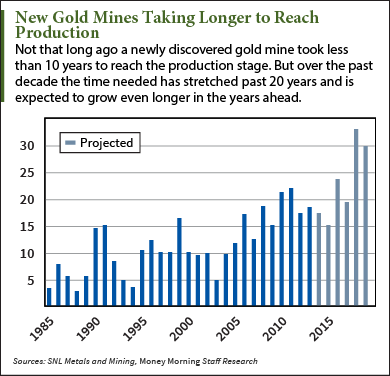 Even if gold discoveries returned to the historic average – which is extremely unlikely – it wouldn't make much difference.

That's because the time to turn a gold deposit discovery into a productive mine keeps stretching – to as much as three times as long.

In 1995 it took about 10 years to go from discovery to production. By 2010, that had doubled to about 20 years. Some discoveries made later this decade could take as long as 30 years to get into production.

With discoveries on the wane and new mines taking longer to go into production, research firm SNL Metals and Mining estimates that global gold production will eventually be cut in half.

But what about that steady green line on the chart that shows consistent production?

That's actually part of the problem…

Normalcy bias. We trend to continue on doing what we are used to ,the things we do everyday and expect no change. Change is hard and most of the time it is recognizable what we should do differently. When you sell a product for less then what it costs you.
Close shop and wait or sell out. What's the point of working if you can't make a living.
Don't try to be smart by half. People want gold and if the mines are shut down,where will they get it. They will pay you to open up and start selling. A future contract to sell gold at a loss is worth piss. Screw the contracts and shut down.

Gold will go up when people realize that it has more value than the almighty US Dollar.

But until then, the un-sinkable US Dollar will continue to be valued and treasured more than gold, oil, food crops, land, diamonds, etc.

No matter how many million phony US Dollars are created out of thin air each day, it's value will continue to go up against everything else. It's totally illogical and defies all rational thinking.

The US Dollar is just a big Ponzi scheme, and like all Ponzi schemes, it continues until you run out of suckers.