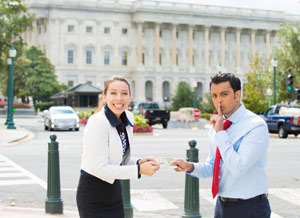 There may be a new insider offense perpetrated by the Washington-Wall Street "corruption corridor" - this one coming right out of the U.S. Securities and Exchange Commission (SEC).

Keith Higgins became the SEC's Director of Division of Corporate Finance on May 15, 2013. His top-tier job requires him to review the books of U.S. public companies to make sure they give proper, updated information to investors.

And in 2013, Higgins was also the biggest investor in individual stocks out of all high-level SEC officials.

You see, over the past two years, Higgins reported he owns large stock holdings worth between $2 million and $6 million across roughly 90 companies. In 2013 alone, he profited between $53,000 and $185,000 in dividends and/or capital gains.

All this as he accessed financial information on all U.S. public companies.

Is Higgins' investment track record an SEC conflict of interest?

We broke down the Nov. 21 report by Reuters - which reviewed pertinent SEC disclosures - so you can be the judge. Please take the time to leave a comment at the article's end - we want to hear from you!

SEC Conflict of Interest: YES or NO

Is Higgins' investment history an SEC conflict of interest? Should Congress tighten SEC's ethics laws, or is the system in place adequate?

Scroll down to the comment section below and weigh in...

You're obviously right–revolving door, fines instead of prosecution for blatant crimes. Congress passed a law restricting their own inside knowledge trading after this being exposed on "60 Minutes." Law repealed shortly later, President Obama signed repeal without complaint. Another segment on "60 Minutes" called out a federal prosecutor on non-enforcement of Sarbanes-Oxley. If G. W. Bush had enforced Sarbanes-Oxley 1/10 as hard as he pursued Saddam Hussein, the '08 – '09 mess likely could have been avoided. Us peons and productive workers must get by as best we can.