What comes to mind when you think of e-commerce stocks to buy? 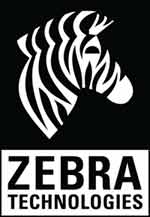 That's because Zebra's role in the e-commerce ecosystem is very much behind the scenes.

This Lincolnshire, Ill.-based company makes the printers that make the labels that get slapped on millions of e-commerce shipping packages.

It's not a sexy business, but it is profitable. Zebra posted gross margins of 50% in its third-quarter earnings report. Revenue was up 15.1% from the same period a year ago. And earnings per share (EPS) rose 22.9% from a year earlier, excluding one-time expense incurred from its $3.5 billion acquisition of Motorola Solutions in October.

ZBRA stock has gone up 47% over the past 12 months as more investors, including hedge funds, have discovered this growth story.

And the gains aren't over…

Why Zebra's a Stock to Buy

The rise of e-commerce has played a major role in Zebra's growth.

Since 2010, e-commerce sales have nearly doubled. According to eMarketer, e-commerce in November and December of this year will rise 16.6%, a trend that is expected to continue.

People sometimes forget that it's not just the exclusively online retailers like Amazon behind the growth of e-commerce. Brick-and-mortar retailers are seeing more online sales as well. 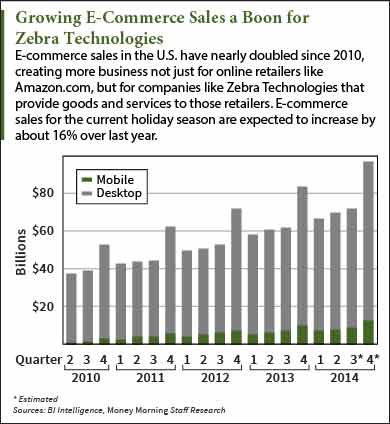 Consumers have become increasingly comfortable with shopping online. And for those that hate the crowds and traffic, nothing beats ordering from the comfort of your home and having it all show up on your doorstep within days… in a package with a label.

You see, Zebra is deeply entrenched in the bar-code printer label business that makes up 75% of its revenue. Zebra equipment is used by 90% of Fortune 500 companies, and the company has customers in 100 countries.

E-commerce will feed Zebra's growth for years, but it's not the only reason ZBRA is a stock to buy.

The company makes more than just printers. In fact, the National Football League adopted one of its products this year…