Money Morning's "unloved" pick of the week is defense contractor Kratos Defense & Security Solutions Inc. (Nasdaq: KTOS).
An unloved investment is one that's been beaten down - but is actually a great value. Investors then get an amazing entry point into a good long-term investment.

Kratos Defense & Security Solutions traces its roots to a company called Wireless Facilities Inc. WFI was founded in San Diego in 1994 as a telecommunications firm. After a series of acquisitions from 2004 to 2009, the company changed its name to Kratos Defense & Security Solutions. Kratos merged with Integral Systems in 2011. Today Kratos provides services in the areas of communications, combat systems, and surveillance. Among its specialties are drone warfare and cybersecurity. The firm has a market cap of about $294 million. Kratos employs about 3,900 people. 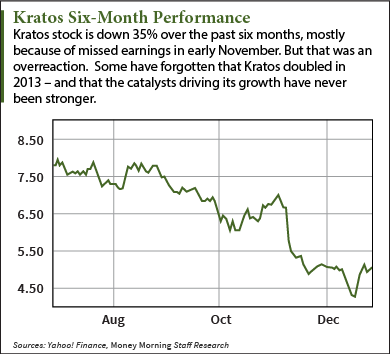 But here's why Fitz-Gerald thinks KTOS will be sitting at $10 this time next year...

I like your undervalued "investment" grade stocks! Please send more