Money Morning's "unloved" pick of the week is oil and gas explorer and producer Northern Oil and Gas Inc. (NYSE: NOG).
An unloved investment is one that's been beaten down – but is actually a great value. Investors then get an amazing entry point into a good long-term investment.

With the recent plunge in oil prices, Money Morning Chief Investment Strategist Keith Fitz-Gerald has been on the lookout for beaten-down bargains. And he believes NOG stock fits the bill.

Northern Oil and Gas: About the Company

Northern Oil and Gas is a small-cap ($365 million) company founded in 2006. Its focus is the oil and gas reserves in the Bakken and Three Forks formations stretching across parts of North Dakota and Montana. NOG owns about 185,000 acres in those formations.

Northern Oil and Gas uses the "non-operator" model. That means it works with partners to drill and operate wells on the land it owns. NOG pays a percentage of the expenses of running the well and gets a percentage of the profits. Headquartered in Wayzata, Minn., the company employs about 20 people.

Northern Oil and Gas (NYSE: NOG) Stock: Why It's Unloved 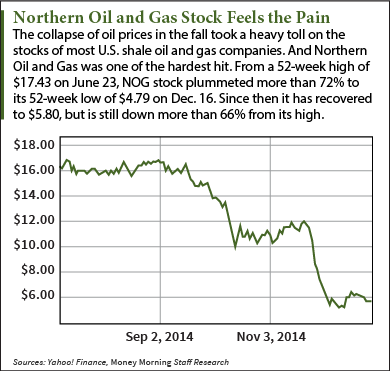 Critics saw the non-operator model as a disadvantage. Then the analysts piled on.

That got the attention of the short sellers. By mid-December, short interest had grown to nearly 27% of the float.

It's ugly. But it's also easy to see why NOG stock is tremendously oversold…