On Thursday, the Swiss Central Bank ended a three-year old policy that prevented the Swiss franc from appreciating too much against the euro.

The move sent the Swiss franc soaring 30% against the euro within minutes.

You see, the franc is the sixth most-traded currency in the world. While holders of Swiss francs realized gains, financial institutions with large holdings of euros or dollars against the franc were routed - especially smaller firms that cannot bear big losses.

And Swiss exporters saw their goods become 30% more expensive to European buyers in a matter of minutes. 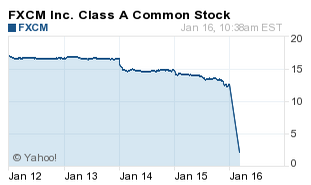 Alpari, a London-based brokerage firm that sponsors the shirt of English Premier League soccer club West Ham United, was forced to shut down. 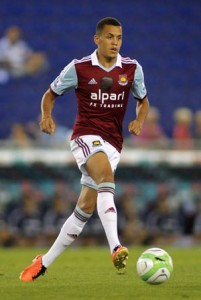 "Where a client cannot cover this loss, it is passed on to us," the company's statement read. "This has forced Alpari (U.K.) Limited to confirm today that it has entered into insolvency."

"News of the impact of this event on companies and traders is just beginning to come to light," Global Brokers NZ director David Johnson said. "As directors and shareholders we would like to offer our sincerest apologies for this devastating turn of events."

While not as devastated, big Swiss banks also got zapped... 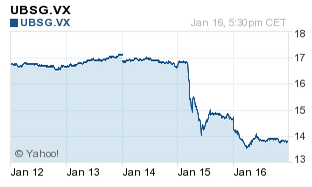 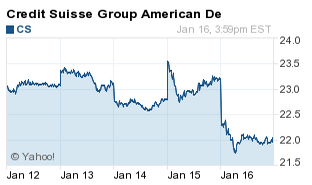 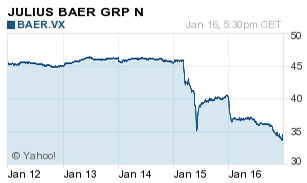 The world's biggest maker of Swiss watches, The Swatch Group SA (VTX: UHR), lost 22.39% Thursday, and lost another 7.09% today. Swatch Chief Executive Officer Nick Hayek said, "Words fail me. Today's [Swiss National Bank] action is a tsunami; for the export industry and for tourism, and finally for the entire country." 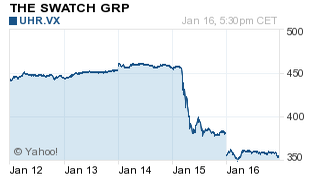 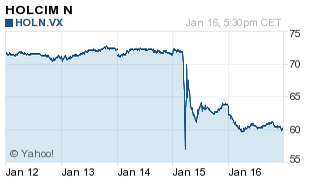 Switzerland-based Nestle SA (VTX: NESN), the world's largest food company, gets roughly 98% of its revenue from outside its home country. Thursday's 12.81% fall marked the company's biggest intraday drop in more than 17 years. 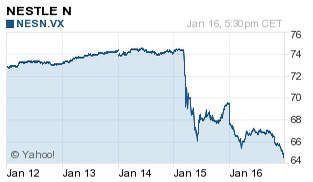 Get a closer look at exactly what the Swiss National Bank's move means for the economy - and for central banking - here...

The pain for Switzerland will be short term. Long-term, they have just prepared the Country for the EU's inevitable collapse and enriched every Swiss Citizen by 30%