I've been following one of the biggest "stealth" stories of the year: the rise of China's yuan as it gears up to take its place on the world stage.

Towards this very goal, China has taken steady, calculated steps for some time.

It's also no secret that China and Russia have a "special relationship" that will drive this trend.

China is likely to help its neighbor in this time of need, and the longer-term global implications could well be dramatic.

The Yuan's Standout Performance in 2014

As of early December, the yuan was the only one of 31 major currencies to have gained on the dollar in the latter half of 2014.

Now, that's not a shock, given that the yuan is pegged to the dollar for now.

But what is surprising is the rise of the dollar, especially in the context of exploding U.S. debt levels.

Despite the dollar's recent strength, I believe it's unsustainable in the longer term. Given the trillions of currency units created by the Fed since 2008, it's only a matter of time before it returns on the path towards its intrinsic value: Nil. 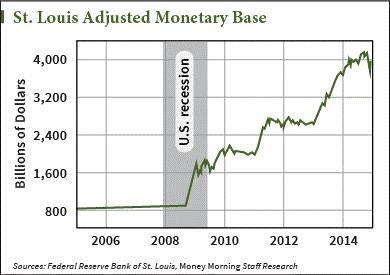 Meanwhile, China continues steadily checking off the items on its "currency reserve" list to gain that status for the yuan.

On December 26, 2014, the China Foreign Exchange Trade System (CFETS) indicated that China would begin trading swaps and forwards between the yuan and the Malaysian rinngit, the New Zealand dollar, and, of course, the Russian ruble.

China is determined to weaken the dollar's global dominance in international transactions and finance, an advantage it enjoys thanks to its status as the world's de facto reserve currency.

But this standing is gradually being chipped away both from inside and outside the U.S.

Having (on a purchasing power parity basis) the world's No. 2 economy, China's currency is becoming too relevant to exclude any longer. In November, we looked at how the European Central Bank (ECB) was considering including the yuan in its reserve currency mix.

As for finding the yuan attractive, the ECB is not alone...

For the Yuan, Few Obstacles Remain

Energy megadeals struck between China and Russia are well known.

In mid-December, the South China Morning Post suggested that "Russia could fall back on its 150 billion yuan currency swap agreement with China if the ruble continues to plunge."

Later this year, the IMF will perform its review (conducted every 5 years) of the currencies members can include in their official reserves.

In order to achieve inclusion for the yuan, China has to pass the IMF's economic targets; the yuan must be "freely usable," it must account for a large number of exports, and its inclusion must be supported by enough member nations.

The IMF has said that "there have been a number of developments regarding the yuan's international use, and the upcoming review would take stock of these developments."

According to the Society for Worldwide International Financial Telecommunication (SWIFT), the yuan's share of global money transfers set a record in September at 1.72%, ranking it the seventh most-used currency.

But support from the United States could remain the biggest obstacle.

A U.S. Veto May Not Be Enough

We overly concern ourselves regarding the "value of the dollar", comparative to other world currencies. as shown on a commodities index! My point is this. (1) If the dollar is king, why must the FEDS buy their own debt? (2) The dollar is king, on paper, and can be the strongest of all currencies, on paper, but (using an extreme to make a point) if no one is using the dollar to trade, it has no value!

The chart — US Dollar Long-Term Trend — it indicates that it is charting the "dollar index" and that it will top out at 87. What, exactly, is that charting? What would I search for to monitor this index. The dollar index against what? Does it have a "name?"

The US Dollar Index (USDX) is an index (or measure) of the value of the United States dollar relative to a basket of foreign currencies.[1]

It is a weighted geometric mean of the dollar's value relative to other select currencies:[2]

I think the chartist in this case is using Fibonacci. About a 50% retracement from the last recent high and low. However, today, the dollar index sits at 95!

Great article. Informative, well written (context and grammar). Gives ones cause to reflect. So few articles do that. Many thanks.

that would mean a breakout to the upside of a 30 year downtrend.

except the dollar oil, stock bond and gold markets are rigged.

they no longer reflect supply and demand.

this is the final stage of a ponzi economy but don't bet prematurely.

throw your charts away and keep your powder dry.