Just over two months ago I unceremoniously kicked McDonald's Corp. (NYSE: MCD) stock off my "Buy" list, noting that for the first time in more than 10 years, the company was no longer tapped into any of our globally "unstoppable trends." Now, with the stock down another 7% since then, the Board has just kicked CEO Don Thompson off the menu, too.

Is this move enough to put Mickey D's back on my list?

That's a great question. It's not for nothing that the stock is practically investment royalty. It's established, it's widely held, and it returned $6.4 billion to shareholders last year.

It's also a logical question because a change in senior management can be a powerful catalyst for higher returns. ABB Ltd. (NYSE: ABB), for example, took off on a 1.359% run in the five years after Jurgen Dormann took over for former CEO Joergen Centerman. Similarly, Yahoo! Inc. (Nasdaq: YHOO) has returned more than 190% since former Google Inc. (Nasdaq: GOOG, GOOGL) exec Marissa Mayer took the reins and launched a series of bold acquisitions in the summer of 2012. 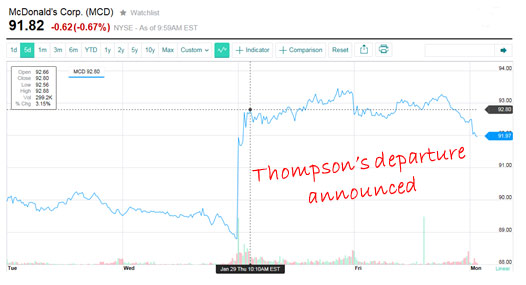 McDonald's stock jumped 5% the day Thompson hit the pavement after a 25-year career and less than two years as CEO, so investors are naturally giving the stock a second look. They're all wondering - "Is this the day McDonald's turns things around?"

My answer may surprise you.

While many investors like to think CEOs have long tenure, in fact they come and go on a regular basis. In 2014 alone, 1,341 CEOs left their companies, a figure up 7% from 2013's total, according to a report by The Street.

That's because not everything a CEO does is good. Many times new CEOs can destroy a company literally and figuratively.

RadioShack Corp. (OTCMKTS: RSHC), for example, has fallen more than 91% since it named Joseph Magnacca to the corner office. CEO Ron Johnson was fired from JC Penney Co. Inc. (NYSE: JCP) after just 17 months on the job following a disastrous reinvention of the company's brand. The stock was down by 25% in Johnson's first year at the helm.

The numbers - never mind the personalities involved here - are terrible...

compare In n'Out burger operation with MCD and it becomes crystal clear why MCD is a dead loser- ON EVERY ISSUE.Enough of in store playgrounds!try quality and service for a change.

I think everyone is missing the point on McDonalds. They were so far ahead of the other fast food places that any decline is going to hurt them the most.
The thing I see hurting McDonalds is the rise of food offerings at the convenience/service stations. You can now get hot dogs, hamburgers, chicken sandwiches and other sandwiches. The drinks are supersize and cheaper than McDonalds or any other fast food restuarant for that matter.
We have a local gas station chain (Thortons) that closed each station and sytematically renovated it before opening again. After opening they offered 4 to 6 different kinds of coffee in 12 to 24 oz cups for $.99. They also have other hot drinks as well as soft drinks, freeze drinks, etc., and…my personal favorite–some of the best large donuts I have ever tasted for $.99 each.
They also have a soft serve ice cream stand where you can make a cone, cup or waffle cone (with sprinkles and toppings) for about $1.29. You basically serve yourself when you partake of all these offerings…no clerk untill after you have stood in line to pay for all your merchandise.
Finally, they have a rewards program whereby you have a token that you can swipe as you check out. Very often you get an email telling you that a free coffee, drink, donut or buy one get one free is waiting for you at your next purchase.
I see tons of people in line with their lunch at these places and they do a good breakfast business, also.

Must-have & Nice-to-have: exactly. Yes, we all must eat, but we don't have to eat at MacD.
Certainly there are much better alternatives in food choices after decades of research on nutrition and daily dissemination of this info. to consumers. Most grocery stores now have 'salad bar' set-ups where one can choose decent food and 'contain' the amounts. It has always baffled me that far too many people struggle with obesity and concomitant health problems, and never make the connection between their bodies and their daily choices and habits. Horrendous abdication of personal responsibility has propped up companies such as MacD because people idle in laziness & ignorance.