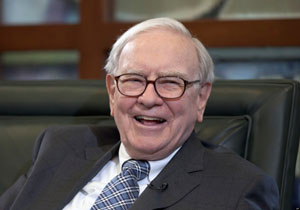 It's no wonder we look to Warren Buffett quotes for investing inspiration. The man is considered the most successful investor of the entire 20th century.

He went from selling chewing gum door to door as a child, to managing a company that beat the S&P 500 43 out of 44 years on a five-year rolling average basis.

And the visionary billionaire has never been shy to share his investment philosophy. We combed through interviews, BRK shareholder reports, Buffett's books, and more to compile the 25 best Warren Buffett quotes of all time...

Warren Buffett Quotes on How to Pick an Investment

Money Morning Readers: The penny stock market won't bite you! It's all about the approach. We've compiled a report on how to pinpoint penny stock winners and added five picks to get you started...

Warren Buffett Quotes on the Internet

Warren Buffett Quotes on When to Sell

Warren Buffett Quotes on Being a Contrarian

Warren Buffett's Biggest Rule of All

The Best Stocks for Short-Savvy Investors: Shorting stocks isn't for everybody - it takes a lot of guts and more than a little conviction to do it profitably. But done right, it can significantly boost your earnings. Here's a guide to profit by shorting five stocks right now...

Thanks. for the last 15 years i have making investments in realestate and other industries.I am impressed with the legendry philosphy of mr Warren Buffet.We like to follow his foot steps and your guidance. Because now is the real testing time to grow against all the odds.

Regards to your team
Jaspal singh

It will always probably be my favorite, not because of its perfection. It's my favorite because this quote prompted me, despite my own fears and trepidation, to become an investor. For that reason alone, it will always have a special place in my heart. Thanks money-morning for publishing such kind of helpful article.
Regards