You'd have to be living under a rock (and one without Internet access at that) to have missed the oil price swoon that has taken place since June.

Even after a recent bounce back from an under-$50 per barrel low, and a trough-to-peak rebound of 24% since the end of January, the technical picture does not indicate smooth sailing upward from here.

In fact, if there's only one metric we need to look at to determine where oil prices are going, it would be this one, and it's not showing the type of move we're hoping for any time soon.

In fact, it shows oil will have trouble "breaking the ice"…

We'll use three of my favorite technical tools to see what could keep crude from rallying in the near term. Let's dig in right now.

There are two moving averages that are almost ubiquitous with institutional traders – the 200 day and the 50 day – representing the longer-term and intermediate-term time frames.

A simple moving average is mathematically very easy to calculate.  For a 50-day moving average, just add up all of the closing prices of the stock (or whatever instrument you're interested in) for the last 50 trading days, divide the total by 50, and plot the result on the price graph. 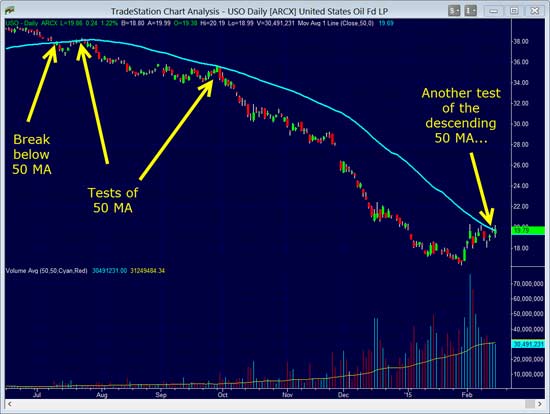 After crude broke below its 50-day moving average in July, it tested it later that month, again in September and then was so weak that it did not muster enough of rally to test that area again until the middle of February.

The descending 50-day moving average forms a strong overhead resistance level by itself – but there are other two other reasons to expect that oil will have a tough time breaking above this congestion level.

Richard Wyckoff was one of the fathers of technical analysis in the early 20th century. His concepts were so useful and comprehensive that they are still in wide use today.

One of Wyckoff's concepts was that of an "ice level" – an area of price support that when broken signals a clear "sign of weakness." These ice levels can occur after uptrends reverse or as downtrends continue. Wyckoff called price acceleration through a defined support level "falling through the ice" – a very simple-to-understand concept that happened in crude most recently in December: 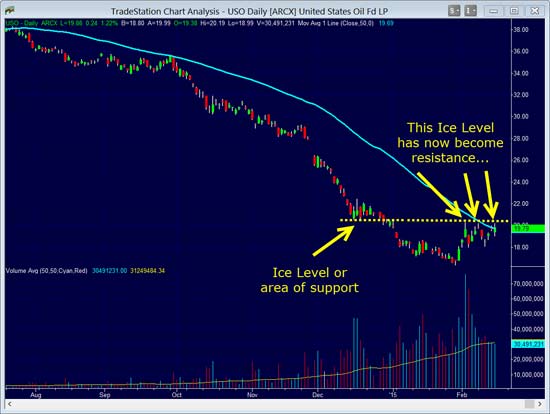 Once again we see the $20 to $20.50 zone in USO acting as resistance in this current price move, and it will take a serious push to break up through this "ice level" from below.

I love your analysis ! Could you do the same for Gas GASL and UNG ? Many readers would probably be interested in that also. Thank you for your incite-full analysis.

Could you comment on the validity of using technical analysis on the price of oil when the Saudi's have established that for now they are in charge of the price and as long as they have volume to pump will paint whatever chart they want for oil?