Knowing how to buy Bitcoin from a Bitcoin ATM is a good skill to have as the digital currency goes mainstream.

Today about 82,000 merchants accept Bitcoin - more than double the number just one year ago.

As more merchants accept Bitcoin, there's a growing need to buy Bitcoin "on the go." That's why the number of Bitcoin ATMs has exploded over the past year.

And Bitcoin ATMs aren't just clustered in places like New York and San Francisco. Both of those cities do have six Bitcoin ATMs. But so does Kansas City. 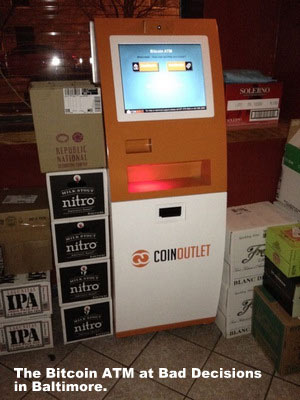 You can find a Bitcoin ATM in Birmingham, Ala., as well as Boise, Idaho.

Bitcoin ATMS are turning up in bars, restaurants, and shopping malls across America.

Baltimore, where Money Morning makes its home, has one in historic Fells Point at a bar called Bad Decisions. And people are using it.

"When I first put it in here I thought it would just collect dust, but we get about three transactions per day," said Bad Decisions owner John Reusing. He installed the Bitcoin ATM at the urging of the Baltimore Bitcoin Meetup group, which gathers once a month at the bar.

Most of those who use the Bitcoin ATM at Bad Decisions do so regularly. Some buy as much as $1,000 worth of bitcoin at a time, Reusing said.

Bad Decisions also accepts Bitcoin as payment for the food and drinks its sells. But rather than convert the Bitcoin to U.S. dollars, as most merchants do, he's kept all of the cryptocurrency.

"I'm mining Bitcoin by trading it for beers," Reusing joked. So far he's accumulated about three bitcoins, worth more than $750 at the current Bitcoin price of about $255.

While just one example, Bad Decisions shows that the Bitcoin ecosystem is taking root. But as Bitcoin becomes more mainstream, people need to know that using a Bitcoin ATM is not quite like using a traditional bank ATM.

That's why Money Morning has put together this primer on how to buy Bitcoin from a Bitcoin ATM...

Not All Bitcoin ATMs Are Created Equal

The first challenge for anyone who wants to buy Bitcoin at an ATM is finding the Bitcoin ATM. Bank ATMs are everywhere, with more than 425,000 in the U.S. alone. To find a Bitcoin ATM, you'll need an interactive map.

The best of these at the moment is Coin ATM Radar. It's searchable and gives the address as well as hours of the location of each Bitcoin ATM.

Buying Bitcoin is the next step, and it's not quite as easy as you might expect.

For one thing, because you're not using a card issued by a financial institution as you would at a bank ATM, the process often requires more verification.

Worse still, Bitcoin ATMs are in no way standardized. More than half a dozen companies are building Bitcoin ATMs right now.

Other than a verification step, you need to have a Bitcoin address so the machine knows where to send the bitcoin you've bought. Having a smartphone with a Bitcoin wallet app simplifies this process. Otherwise you'll need a QR code printed on paper.

How to Buy Bitcoin with an ATM

In general, the process of how to buy Bitcoin from an ATM goes like this:

I have personally never seen one in person. There is just not enough people using it. I am sure more and more will pop up but I can't see them being mainstream for at least 10 years. I am not running though! I am invested for the long haul and I will be one of the first to say “I told you so!” when it does work :)