Most of the mainstream financial media is frothing over what Apple Inc. (Nasdaq: AAPL) will do for the Dow.

Apple will join 29 other Dow Jones Industrial Average stocks after the close of trading March 18. It will replace AT&T Inc. (NYSE: T) - a Dow member for nearly 100 years (but for a one-year absence in 2005).

But a look at how Dow stocks do after changes to the index says AT&T stock is headed up...

You see, when you compare the performance of previous Dow Jones rejects with the stocks that replaced them, on average the rejects come out ahead.

They found that the Dow Jones rejects collectively gained 175% in the five years after they were removed from the index, while the new members gained just 65%. 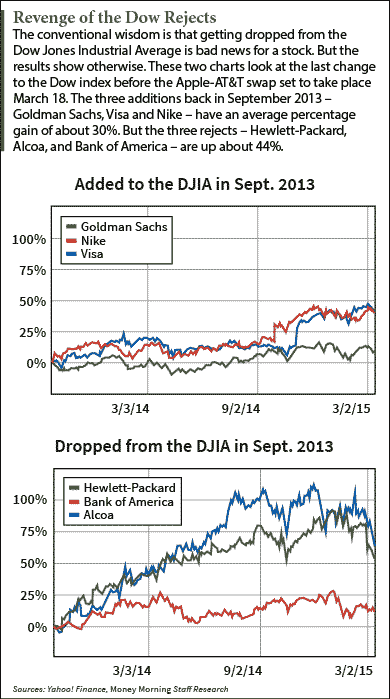 To see this phenomenon in action, just look at the results from the last change to the Dow Jones stocks.

Collectively, the three additions are up 30% since the switch. That's nearly double the gain of the Dow during the same period - not bad. But the three rejects are up about 44%.

That's a 47% difference in profits.

And it's not like this is a statistical fluke. The Pomona study looked at 50 stock substitutions in the Dow Jones over a 78-year period.

Yet this still leaves the question of why this happens. Such topsy-turvy results seem to contradict all logic.

This makes sense when you look at what's really going on...