The other day I saw an ad for a mattress store that offered financing, so you can "sleep in peace" on your brand-spanking-new $7,000 mattress set. (Talk about irony!)

Having personal debt is the American way. It makes the impossible possible. It's seen as benign or even good.

Personal consumer debt is one of the most dangerous financial products ever created.

The way I see things, debt is nothing more than "plastic prosperity" that makes you feel like you have more spending power. It's a myth that's been sold to the American public methodically and systematically for 30 years. And it wrecks lives.

Getting out of debt (or avoiding it entirely) is an absolute imperative when it comes to building Total Wealth.

But as an investor, there is one instance where you should consider taking on debt.

There's one instance where debt can even be profitable.

First Thing's First – Get Personal Debt out of Your Life

Before I can show you the one way you can use personal debt to your advantage, it's really important to step back for the bigger picture.

Washington believes personal debt is absolutely essential to the economy, noting repeatedly that both industrial output and employment would suffer if consumer credit diminished. What else would you expect them to say?

But Washington's got it wrong.

Rising credit usage is a sign that more families have to borrow to make ends meet. It's not a sign of returning consumer confidence, but proof positive that everything's getting more expensive.

Critics – and debt proponents – screech that overall debt levels are dropping and that this is a sign that the economy is getting stronger. They're right on one count… overall indebtedness has fallen from $19,000 per household at the height of the financial crisis to $15,611 as of January. 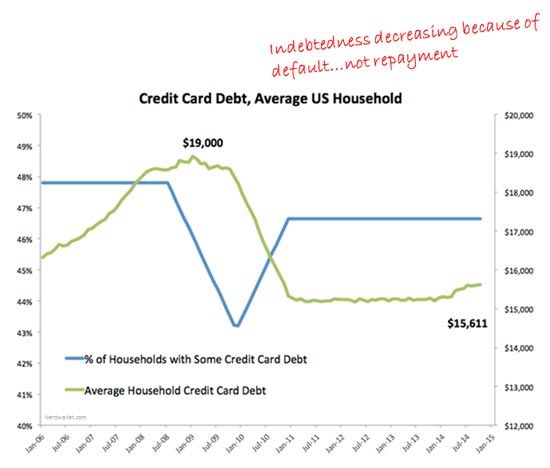 Here's what they're missing…