I love the payments industry.

And I love the buyouts that so often follow spin-offs.

Getting all three of these in one deal would be a grand slam that really juices your profits.

For the deal I'm bringing to you today, we're guaranteed the first two.

And if that spin-off gets bought out, we'd have a really big winner on our hands.

Here's how I think this "grand slam" will come together...

When Divorce Is Profitable

Here we have a "legacy" tech firm that plans to spin off its much faster-moving payments unit later this year.

In this transaction, you'll buy shares in one company now. And after the larger firm separates that payments business into an independent, publicly traded company - a "spin-off" - you'll end up with investments in two great companies.

And that second stock will be free - you won't have to lift a finger or pay another dollar to get it. 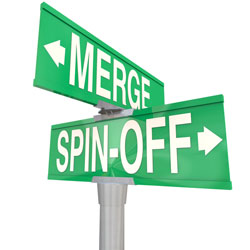 Years of research shows us that new spin-offs usually beat the market by double digits for up to three years - so we already have a pretty good deal going here.

However, I believe this separated company will be very attractive to several suitors within the $1.6 trillion payments industry, which is rapidly changing and growing due to near-daily innovations in mobile technology and e-commerce.

A corporate breakup is almost always a rallying point for the new company's stock.

The reason is simple. As companies bulk up over the years, their sheer size and complexity often serve as a brake on their fastest-growing units.

In fact, the more disruptive the technology, the more likely the spun-off firm will outperform both its parent and smash the overall market.

If you're not convinced, just look at that research.

Lehman Bros. studied 85 spin-offs between 2000 and 2005 and found that they beat the Standard & Poor's 500 Index by as much as 45% in their first two years as independent companies.

Moreover, the further you look back, the brighter the picture.

Two professors at Penn State University examined 30 years of market data covering 174 spin-offs. Their study revealed that in the first three years of operations these new companies showed price appreciations of 76%, beating the S&P 500 by 31%.

The corporate spin-off I want to share with you today, I believe, will do even better.

You guys are promoting two opposing perspectives, it seems. In the $100T collapse, no stocks will be worth anything. Paid off realestate will be very worth investing in. Chaos will rule. Stockpiling food and supplies would be good.
Ebay will be a great "investment" in two or three years?? What about the collapse.
Are you going to see the new Mad Max movie for a preview of what buying things online will look like?

Back in the early sixties, before NORAD, the gov't built a secret command bunker under the Holyoke range in Western Mass. It was from there that the Cubam missle crisis was focalizing attack responses. Woody Allen depicted General Lemay there in the comedy DR Strangelove. Sometime around the early eighties the property was sold to Amherst college as an archive book repository for the whole Five Colleg system because of all the air handling capacity there. But, before that when locals questioned why the 20ft razor wired fences and guard dogs between the second 20 ft fence were necessary the response was that Bank records were being stored there so that in the event of a Nuclear War people would still be able to write checks. WTF