What I am about to tell you could reshape labor markets and, in the process, create an entirely new group of millionaires savvy enough to cash in.

Last year I told you about one of the most inspirational companies I've ever visited, Ekso Bionics Inc. (OTCBB: EKSO).

At the time, the company was almost completely off the radar and totally unknown to both investors and analysts alike.

I promised you that wouldn't be the case for long because the company had something other small startups didn't: real products, real customers, and applications that potentially extended sales far beyond the medical and military markets it had initially targeted.

I also told you that the company would attract a lot more capital down the road once others saw the potential... as long as management continued to produce results. 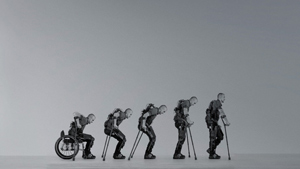 I've italicized that word because good ideas are a dime a dozen. Over the course of 35 years of analyzing companies, I've seen more than a few seemingly great companies blow up because they couldn't execute. For every Apple or Google, there are thousands of startups that didn't make it.

That's why I'm so focused on seeing what's next. It's also why I won't recommend any company to you without the potential to double in five years or less... at a minimum.

By all accounts, Ekso Bionics is on track and producing results that make it more valuable by the day.

It's no wonder analysts are finally coming around. Though "falling all over themselves" is more like it...

I can see how that would appear to be the case but, no. I am not a pitchman for Ekso or any other stock for that matter. I have never discussed EKSO in any media appearance. Like all our recommendations, EKSO rose to the top by virtue of concerted analysis and ongoing independent research related to the company, its products and its potential. Further, our entire organization – myself included – has strict policies against personal ownership, endorsement and compensation to prevent conflicts of interest.

Best regards and thank you for being part of the Money Morning Family,

A severe drop today on a report that is polar opposite of yours. I also notice that this stock is not part of the Total Wealth or MM recommendations list after the heavy recommendation.

Comments on how this will play out are greatly appreciated,

For all those concerned about EKSO: Keith will have a full response tomorrow (Wednesday). We can tell you that the problem is a short-seller spreading misinformation about EKSO on another website. Stay tuned.

Looking forward to seeing what's going on with ekso–thanks.

Here's a link to Keith's response regarding EKSO (on his Total Wealth Research website):
http://totalwealthresearch.com/2015/06/how-to-handle-a-short-attack-on-a-stock-you-own/

Video shows Rewalk's exoskeleton as far more effective and half the cost. Insider selling, hiring fraudster to promote stock and turnover in company management does not bode well for success. Is EKSO truly positioned for success. Please convince me. Appreciate that you will comment Wednesday.

If speed is your only metric, with out surrounding evidence, you might be right. In the video your talking about, the guy in the Rewalk Suit might have had 100 times the experience. The Ekso unit might have just been on a slow training mode as well. The expensive cost of Ekso comes from the much greater technology it uses. If you actually take a look at Ekso's patents vs Rewalk patents; it makes the Rewalk Patents look like they were written by a little kid. Ekso physics is FAR superior, which I can tell you as an undergrad physics student. The Rewalk system is essentially 2 joints and a balancing system. Ekso mimics a real body much better. The US government would have contracted Rewalk if they thought it was a better system.