Financial news today is abuzz with headlines about the Greek debt crisis.

The biggest development came last night (Thursday) with International Monetary Fund Managing Director Christine Lagarde quoted as saying a Greek exit is a "possibility," adding the IMF to the chorus of Greek creditors who have been raising the stakes on a possible "Grexit." 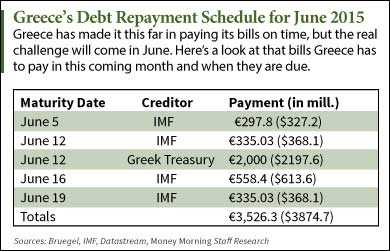 It blew up headlines in the financial news today. She since denied having said it.

But even if she had, it wouldn't be that scandalous. What makes it so tantalizing is the fact that it would be coming from so high up in the chain of international financial officials trying to clean up the Greek mess.

The conversation on Greece has changed dramatically over the last five years.

In 2010 when former IMF chief Dominique Strauss-Kahn was helping negotiate the initial Greek bailouts, the question wasn't whether Greece would be unable to pay the bailout loans, but whether the moral hazard implications of bailing out a profligate spender would be worth forking over the €110 billion ($120.8 billion).

It essentially became akin to the Troubled Asset Relief Program (TARP) debate in the United States.

In 2012 Greek elections, when the Syriza party first crashed onto the scene as the anti-status quo, leftist force looking to reject internationally imposed austerity measures attached to bailout loans, they were seen as a fringe group.

Then, when the financial news headlines talked about a Grexit, it wasn't about Greece being unable to pay its debts. Rather, it was about whether Greece would actually listen to the Syriza party, reject the bailout package, and default - all as the European Union and IMF held out this lifeline.

A lot has changed since then...

The Greek public voted for that fringe leftist group in January 2015, unlike in the summer of 2012.

The Greek public isn't as receptive to bailout packages with austerity conditionality, but has become a lot more receptive to the Syriza party's message that austerity has been impoverishing the Greek people.

The EU and the IMF are no longer willingly throwing Greece a lifeline. German Chancellor Angela Merkel earlier this year appeared more open to a Grexit than she did in 2012.

And now, even the IMF chief is - allegedly - floating the possibility, despite that very organization helping underwrite those toxic bailout loans in the first place.

A Greek default won't come because Greece decided it didn't want to pay its debts. It will come because the strategy of loading Greece down with more debt to pay off its existing debt was unsustainable in the first place.

Michael Hudson, economist and research professor at the University of Missouri-Kansas City, articulated it best when he said, "debts that can't be repaid, won't." It rings truer here more than ever.

"One way or another, there will be defaults - unless debts are paid in an illusory fashion, simply by adding the interest charges onto the debt balance until the sums finally grow to so fictitious a magnitude that the illusion of viability has to be dropped," Hudson wrote in a 2012 paper.

Greece is at the point where the debt has grown "to so fictitious a magnitude..."