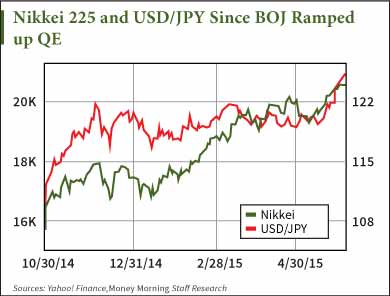 The weakening yen is much of the same.

The Nikkei 225, the leading Japanese stock market benchmark, is up 31.2% since the Bank of Japan announced it was going to ramp up its already existing quantitative easing campaign by another ¥10 trillion ($80.2 billion) a year.

And the dollar has appreciated against the yen 13.5%.

However, the mechanics of quantitative easing don't really support this kind of movement in either market.

As the old axiom goes, "The markets can remain irrational longer than you can remain solvent." And right now, the Japanese stock market and the yen are stubbornly irrational.

The Real Story Behind the Japanese Stock Market and Weakening Yen

The soaring Japanese stock market is creating a "wealth effect" that masks the true tragedy befalling the Japanese consumer right now. While the Nikkei 225 recently established new 15-year highs, consumer spending has continued to shrink. The country's population is aging, not spending.

And the falling yen is not because of the BOJ's monetary policy. Traders have hammered the Japanese yen in a speculative attack - selling yen and buying dollars.

To understand why QE isn't working, you have to understand how it is intended to function...

QE is often mistakenly viewed as a "helicopter drop" of money on the economy or "money printing." But it's neither.

Here's how the Bank of Japan's QE works...

This is not money printing. It's an asset swap.

The BOJ only rearranges the composition of the commercial bank's balance sheet, and it is all done with simple computer keystrokes on an electronic spreadsheet.

The BOJ's balance sheet does expand, but the bank does not truly create new money. If anything, it could be billed as "reserve printing," but that is hardly the same thing.

That's because bank reserves do not enter the private economy. Banks draw on these for the purpose of lending to other banks. And while there are reserve requirements, banks aren't constrained in their lending by them. They can make as many loans as they want and then obtain (rather easily) reserves in the interbank market after the fact.

The only thing constraining loans are capital requirements and loan demand. And with household consumption falling the last four quarters in Japan, it's becoming increasingly obvious that the Japanese consumers aren't lining up for loans.

If anything, QE in Japan adds deflationary pressures to the economy that don't support the current devaluation.

But Japanese consumers aren't taking out loans large enough to expand the money supply in a meaningful way that would stoke inflation. And as all that is happening, the BOJ is pushing interest rates lower, which actually removes yen from the private economy in the form of falling interest income.

Now, here's why the yen and the Japanese stock market are not responding accordingly...

The dealers don't use all the cash to buy more government bonds. They're dealers. It's their cash. They use it to trade securities, derivatives, whatever and wherever they think they can buy inventory, mark it up and distribute it. The central banks only think they make policy. Ultimately the Primary Dealers make policy based on where they decide to deploy this cash that the central banks print and deposit into their accounts every week.

Stocks are one of the easiest vehicles to mark up and sell. The correlation between central bank money printing and rising stock prices is direct because the mechanism is direct. If the dealers aren't buying stocks outright at their prop desks, they're financing their biggest customers' purchases at near zero rates.

Works exactly the same as in the US. Also, 13 of the biggest US Primary Dealers are Japan and European governments Primary Dealers. They are counterparties with the Fed, BoJ and ECB along with the government's issuing the bonds. They decide where the cash goes. When the BoJ or ECB print, the ECB and BoJ correspondent dealers can and do purchase not only the securities of their home markets, but also, particularly, the US.

The big question now is why, with all the new printed money being pumped into the world liquidity pool, US markets are so flat. The answer lies in a slow shift of confidence. The QE camouflages that but the big boys are tip toeing out the back door while the US stock and bond markets churn.