Even I sometimes get overwhelmed by the jargon used by tech industry insiders.

From investor presentations to product-launch slide shows, I've come across plenty of tech neologisms that made my head spin at the time.

This barrage of here-today-gone-tomorrow buzzwords often serves as a wall between the tech world and average investors, keeping newcomers from understanding what's really going on.

Once you understand them, there are literally trillions in profits up for grabs...

I've been in and around Silicon Valley for more than 30 years and I've seen a lot of innovation and a lot of money made.

However, a slew of tech sector innovations - including the ones I'm telling you about today - are now "interlocking" and creating moneymaking opportunities unlike anything I've ever seen.

I'm talking about everything from the connected car to wearable tech.

The trouble for new investors is that so many of these new technologies are pretty complex. And the words connected with them, even though they've been market-tested to death, often obfuscate the very things they're trying to convey. 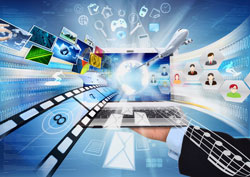 With that in mind, let's do a "teardown" on four pieces of tech jargon to illuminate their economic potential...

Gigabit Internet service is destined to affect billions of homes and businesses around the world. You may also hear this technology referred to as "fast Internet" or "ultra broadband."

The term "gigabit" refers to a speed of 1 gigabit per second. That 1 gigabit equals 1,000 megabits. And what it means is that our Internet service could soon become a lot faster.

Currently, average U.S. broadband speeds are around 25 megabits per second.

Gigabit Internet would be 40 to 100 times faster than the pokey Internet service we've got now.

Tech industry insiders tend to call it "gigabit fiber" because we need fiber-optic cables to reach such high speeds. These thin strands of glass or plastic literally use beams of light to transmit voice, photos, music, movies, and other data - and there's nothing faster than light.

Gigabit Internet, which is beginning to pop up in the Kansas City area, Austin, Texas, and elsewhere, will greatly enhance sectors that depend on fast Internet connections.

For you, right now, with the likes of Netflix and YouTube becoming such bandwidth hogs, Gigabit Internet would mean a much better video-streaming experience.

And in the near future, gigabit Internet will make ultra-high-definition television (UHDTV), or "4K," more workable. UHDTV signals have roughly four times the resolution of high-def TV sets and could easily bog down your home network.

And that's just for starters. Gigabit Internet will shake up the $93 billion market for Internet service providers and will play a key role in the $1.7 trillion market for e-commerce, which includes streaming music and video.

Which brings me to my next tech-industry term...

Thanks for the insightful article. Always good to be up on the lastest technology and terminology. The gigabit internet sounds wonderful. No waiting for anything!!!

The world is changing at a most notable speed, and I fear I will get left behind because I can't go that fast. The information we have access to today is too vast for the normal person to take it all in and make something of it, after dealing with the daily chore of keeping your personal life in order. When will the robot secretaries being a standard in our lives come to pass? I'm already to buy one, as the wife has long ago quit that job!