Every so often, in sharing a story about a "Disruptor" catalyst making waves around us, I'll recommend a story-related stock.

One recent example was IAC/InterActiveCorp (Nasdaq: IACI), which I recommended in my June 12 report, "Today We're Going to 'Fix You Up' With a Winner."

It's only been two weeks, but IAC is already following my storyline. 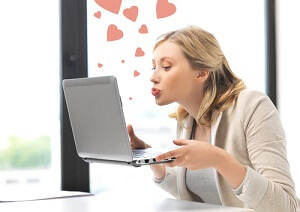 Of course I was trying to be funny with the "Fix You Up" reference in the title, as the story was about online dating in general. But I was quite serious in predicting that Barry Diller's IAC/InterActiveCorp would spin off its Match Group of properties into a separate company and issue shares to existing IAC stockholders.

Well, it didn't take long. Sure enough, last week IAC said it was going to do just that, and spin off the Match Group into a separate company. In a statement, IAC said that it expects Match Group to issue close to 20% of its shares in the IPO.

In my report, I accompanied my recommendation with a specific "Buy" strategy.

I still like the company, but today's markets are fluid – meaning the strategy I detailed needs refining.

Today, I'm going to do just that. And you don't want to ignore it…

After all, online dating is a $2 billion business…

But it's not a perfect world – which is actually a good thing since it means the overall market didn't tank (at least for now). So we didn't get to load up on IAC at a level much lower than where it was trading when I made the recommendation.

Even so, I'm betting at least some of you folks bought some shares that day – especially since I concluded by saying: "The only thing is, if you wait to pick up shares a lot lower, you may not get a chance. The market could climb the current 'Wall of Worry' and go a lot higher before it eventually 'corrects.' Barring a Match Group spin-off, smartly buying IAC shares and adding to your position on dips could be a great way for you to fall in love with online dating. And if that happens, just remember: We were the matchmaker that 'fixed you up' with this big-profit Disruptor."

If you listened – and acted – you're at least a little in love this week.

So here's what you should do now…