Normally I highlight trades that should take about 30 days to find us a double.

I rarely write about trades expecting them to work faster than that 30-day horizon. However, when a trade works as quickly as Halliburton Co. (NYSE: HAL) recently did, I don't want to ignore it, nor pass up on taking the money, even if it's not at the "double" I'm normally waiting for.

And by quick I mean three trade days quick! I didn't anticipate this trade happening so quickly, though I figured it would have to at least happen a bit quicker than normal.

This one worked in one-tenth the usual time.

So instead of waiting, I went for it, trusting in the tools I use to find these moneymaking opportunities.

There's lesson in all of this, and it's all about what a 70% gain can teach us about my investment methods - and our ability to generate some serious financial returns...

A glance at my Money Calendar tool on Halliburton (NYSE: HAL) back in April revealed something very promising, as you can see in the chart below. 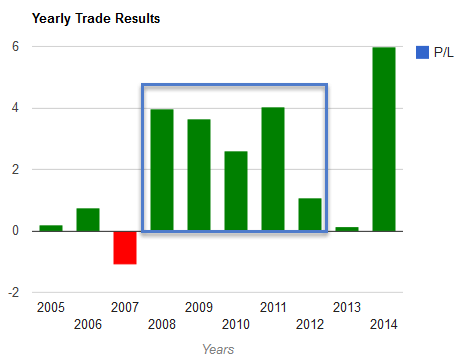 Even better, the Money Calendar tool showed the moves to be 90% reliable in nine out of the last 10 years. The time frame on average for the move was nine days.

So you can see that my trade length expected from the signal wasn't that long to begin with, either.

One other thing that underscored the need for this to be a quick hitter was that earnings for HAL were due to be released around April 20th.

Therefore, I felt I'd likely need to be out of the trade before the announcement, so that I didn't have that scenario to contend with.

Our next chart shows what Halliburton stock looked like on April 10th, with the trade expected to be a nine-day move starting April 13th. 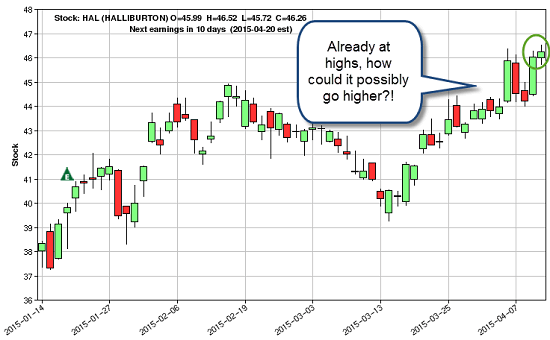 Now, a lot of people will look at a chart like this and say the stock is already at its highs, it has to pull back eventually, and as a result they'll basically talk themselves out of a trade.

I say trust in the tools and trust in the backtested, proven results of these patterns, and do NOT overthink things!

Build a trade plan to take advantage of what is a high-probability occurrence to come.

In other words, find repeatable, proven patterns and...

Put Your Money in Before the Move!

Here's how it played out:

The anticipated average profit move was shown as +$2.13 over the nine-day period. The target price on the stock, as written, was $48.39. The profit potential with HAL at that price looked like +$172 per contract.