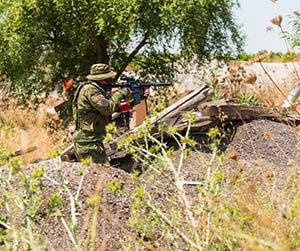 It's a question on the minds of many Americans, Texans in particular: What is Jade Helm?

Defense Secretary Ashton Carter, as well as President Obama, emphatically state that Jade Helm is just a large-scale military exercise. They say there is no reason to suspect anything sinister is going on.

You see, on March 19, outspoken radio show host and conspiracy theorist Alex Jones announced on air that one of his interns had obtained a secret military document. This document, Jones claimed, labeled Texas, Utah, and a portion of California as "hostile territory."

Public paranoia only got worse when, on April 29, Texas Governor Greg Abbott deployed the Texas State Guard to monitor the Jade Helm's exercises. Then, Senator Ted Cruz said he "reached out to the Pentagon" with concerns about Jade Helm exercises.

While the president and military chiefs continue attempting to assuage public concerns, more than a few citizens have developed Jade Helm conspiracy theories of their own...

Here are a few segments:

You're Definitely Fired! The Donald Trump campaign hit an embarrassing bump on the election trail Tuesday (July 14). A Trump intern tweeted a promotional photo that accidentally featured Nazi soldiers. Here's the full story behind that gaffe...

Blue Bell Ice Cream has been shutdown nation wide. Now a billionaire gives them a 125 million not long after the Sylacauga Al plant announces a test run of ice cream. Then they are silent on when they will reopen for normal production. There are also major remodeling and construction of the Sylacauga plant even though they may or may not reopen. https://www.youtube.com/watch?v=aaUsGw2ksks

I believe it is a military exercise. Been done before in certain states like back in the 70's to control riots where 4 college students where shot from a 1/4 mile away on top of hill by the National Guard. Kent State Shooting. Ohio 67 where injured when the governor ordered fire on a peaceful protest. I do believe what goes around comes back around. GW Bush & Dick Cheney committed the same ole politics in office that they used as kids provoking the 9/11 attacks. Dick Cheney had Bush sent to Florida to a school that was not even an American School of children where Florida was the training grounds for the terroists involved as well as many others trained under the nose of Jeb Bush as Governor. I believe if we are attacked the next attack will be on 9 nuclear facilities coming in from New York taking out the Statue of Liberty because Tony Blair can not possibly be friends with the Bush family anymore for what he lost. They would be going after the 9 nuclear plants that set just out of Washington. #2 strike says they would go after the Keystone Pipeline coming through Texas from the Gulf. They never attack anything in history that is not a global involvement attached to it such as the World Trade Towers. I think 9/11 was a cover up of many blotched attempts on a cheap level where they got lucky some crazy fools decided to hi-jack some planes that day where Yasar Arafat was the 1st to offer condolences. It was his style of leadership in war. Always looking for the reason. It's better to look for the reasons of the next attack as apposed to looking back in time as to what happened in history. Wars are fought when the cost of living is too high and businessman are losing money. Bad politics. Westinghouse has built some bad low grade low quality nuclear re-actors. Attempts to build new nuclear re-actors with refurbished parts will be the next thing needed to cover up. One in Ohio was opened where the inside core melted and was leaking. It was shut down and converted to coal. Every energy company that has attempted to invest in nuclear energy without federal funding and some with have gone bankrupt having to merger into other companies to stay in business. Theories are there but they should keep them real. Prepare but keep it silent.