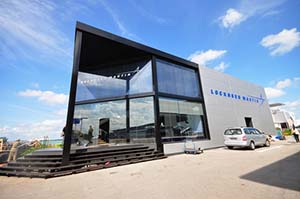 What if the F-35 is cancelled?

That's a question that has no doubt been on the mind of every holder or prospective buyer of Lockheed Martin Corp. (NYSE: LMT) stock.

The F-35 is the largest military contract in history. Lockheed serves as the principal contractor - with some help from Northrop Grumman Corp. (NYSE: NOC) and BAE Systems Plc. (OTCMKTS ADR: BAESY) on fuselage parts - on the ambitious Joint Strike Fighter program that is expected to cost $1.4 trillion over the 56-year life cycle of the project.

Of that $1.4 trillion, $1 trillion will go toward maintaining the aircraft and another $400 billion will go toward the actual purchases of over 3,000 planes - 2,400 in the United States and 600 spread across foreign buyers in the UK, Australia, Canada, Denmark, Italy, the Netherlands, Norway, and Turkey.

There are also buyers in Israel, Japan, and South Korea, with some rumblings that Singapore will join the buying frenzy as well.

What makes this project so ambitious is that it is the next generation of manned fighter craft and is by many expectations going to be the last manned jet. Unlike past fighter craft like the F-15 used by the Air Force or the F-18 used by the Navy and Marine Corps - both Boeing Co. (NYSE: BA) aircrafts - the F-35 serves many masters.

It's going to be purchased by the U.S. Air Force, the U.S. Navy, the U.S. Marine Corps, as well as the UK Royal Air Force and the Royal Navy.

All in all, it's a giant military contract. The stakes are high for Lockheed Martin - and LMT stock - to deliver on this program. Investors are nervous.

And no one can blame them.

The F-22 ended up being scrapped after ten years in 2009, when the costs and delays became too fiscally untenable for Congress to continue funding.

In fact, Lockheed Martin's history has been colored by failed projects...

Lockheed Martin wasn't always the poster child for the military industrial complex. Nor was it always the largest, undisputed leader in getting government business.

In 1932, Lockheed Aircraft Manufacturing Co. went bankrupt along with its parent company, the Detroit Aircraft Corp.

Its assets were later salvaged by investor Robert Gross, setting the path for Lockheed to shift from a lowly aircraft manufacturing company dreamed up by the Loughead brothers in California, to a blockbuster government military vendor.

This was the first step in building what became the modern Lockheed Martin.

While the US Government can reduce the number of F-35A, -B and -C aircraft it buys from Lockheed Martin like the F-22 Raptor fighter jet; it's unlikely that the US Government can afford to cancel the F-35 program without having a successor on the horizon as well as the necessity to buy legacy aircraft like the F-15, -16 and -18 until a successor is ready and with production time and cost of the F-35 going down to near the price of legacy aircraft even a reduction to total number is unlikely.

Yes, Lockheed went bankrupt in 1932. But since then they managed to get the US's biggest military contractor. Therefore it is ridicolous to result their unsuccesfulness.
The F-35 by the way will get a final report about its "being ready for use question" from the US Marine Corps soon and it look quiet positiv so far.

So how is it the F-35 which is a heck of a lot more expensive than the much BETTER F-22 has survived? Build more Raptors and get rid of the F-35 overpriced single engine no gun/ground support capability piece of junk.

They make $1.10 for every $1.00 they spend in development. Then the Department of Defense offers them a termination fee that usually amounts to 10% – 20% of the contract value. While I don't have the specific contract terms available to me, I would predict that Lockheed stands to make anywhere from tens to hundreds of billions of dollars off JSF in termination fees. That's essentially all profit. The program is cancelled. A new program takes its place. There are so few defense contractors now that each company almost has a lock on whatever program suits its niche in the market. They make their guaranteed profit off of development then get their termination bonus and the cycle repeats.