Before this month's crash, Chinese markets doubled over seven months to peak at 5,166 in mid-June.

On the way up, anecdotes abounded of farmers abandoning their fields in favor of trading stocks on margin. By late June, there were more individual investors in China than the 87.8 million card-carrying members of the Communist Party of China.

Now, of course, the Shanghai Composite Index has crashed a staggering 28% since June 12. The boom isn't done going bust; there may still be more pain to come.

But the Chinese markets' spectacular crash obscures one of the most important market truths of the 21st century...

And one U.S. company has become the top choice to profit from this shift…

Stiff Headwinds Are No Match for China's Power

A reading below 50 is considered to be a contraction. The PMI is based on new orders, inventory levels, production, supplier deliveries, and the employment environment across manufacturing, construction, retail, and service sectors. 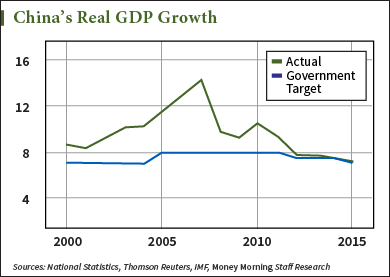 Forecasts for economic growth in China, according to a late July Reuters analyst poll, called for a 7% expansion this year and 6.7% next.

That's down considerably from the heady days of 10% and even 14%, which honestly shouldn't come as a complete surprise.

But what many China watchers forget is that a 7% rate of GDP growth this year would produce more output than 14% did just 8 years ago.

That's because - as I highlighted for you back in November - China has overtaken the United States as the world's largest economy. China's GDP is $17.6 trillion, versus America's at $17.4 trillion, on the basis of purchasing power parity.

Thanks in part to this milestone, some believe China's economy is one that's transitioning from a manufacturing/export base to a consumer one.

And the current Chinese government is certainly doing its part to help steer it in that direction...

With an initiative towards improving production efficiency called "Made in China 2025," the government is implementing a strategy to shift the mentality from quantity to quality.

There's even the "Internet Plus" effort, which attempts to lift efficiency in areas like automotive, electronics, and distribution through the use of digital technology.

Still, some multinationals whose success relies considerably on China are complaining.

Wonderful report on China future consumers drive and hence,there is a very good
market for Apple and other consumer goods products.
Please keep up and thank you very much
Warm regards

Will you be letting the community know the right time to buy Apple stock? It seems as
though it is still falling, from what you indicate. Thanks for your reply.

Ah, yes, central planning by communists. That always works out so well.