Once a candidate enters the running, he or she is required to submit personal financial records within 30 days. Kasich did so July 31. Here's a look at the Republican's net worth... 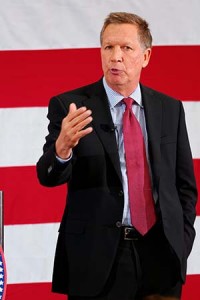 John Kasich reported three assets valued between $500,000 and $1 million and seven assets valued between $250,000 and $500,000. Furthermore, according to an article in The Columbia Dispatch on Aug. 1, at least $2 million of the Kasichs' assets are in the form of tax-free investments. John Kasich alone is worth an estimated $2.5 million. However, along with his wife and daughters, John Kasich and kin have a combined net worth between $9.1 million and $22 million.

Kasich's July 31 fiscal filing was the most detailed account the public has ever gotten of his personal wealth, stated an Aug. 3 post on Cleveland.com. During his gubernatorial campaign, the candidate released all of one tax return - for the year 2008, when he made $1.4 million.

The governor speaks often about his blue collar roots as the son of a mailman in McKees Rocks, Pa. However, Kasich has shown he sometimes has a tough time actually relating to the working class. According to Newsweek on Aug. 2, when a 21-year-old factory worker told Kasich his biggest dream is to own his own house someday, Kasich responded flippantly: "Do you save? You can't spend all the money on fishing gear."

Koch Dealers: Just a couple of weekends ago, the infamous Koch brothers hosted a gathering of the nation's wealthy elite. There, five 2016 presidential hopefuls did their best pandering for donations. Here's how the Kochs' "Summer Summit" went down...

JOHN KASICH AS PRESIDENT IS A BAD IDEA…JUST LOOK AT OHIO!
He promises absolutely anything to get elected & then totally ignores voters to favor large corporate interests, especially the banks, no matter how much it harms Citizens. Quote me or prove me wrong! If you want John Kasich out of politics: Then I have your solution. As Governor, John Kasich acts as if he still works for Lehman Brothers. It certainly is not for Citizens of Ohio like my family or yours. What I expose here is an early Christmas present for the Obama Administration, the entire Democratic Party and anyone who is a Civil Rights Advocate to turn the tide of politics in the upcoming election. https://www.linkedin.com/profile/view?id=47607995

I am qualified to make these statements & have ample evidence! Just take a look at the first 36 lines of my LinkedIn Profile. As a Licensed Real Estate Broker & Victim of RICO Crimes in Ohio Courts who has contacted Governor Kasich’s & the Attorney General’s offices many times, I can prove Judicial Corruption is absolutely condoned by Ohio. My case is a prime example of how Ohio Has Deprived Tens of Thousands of Citizens of their Civil Rights & Due Process of Law. This has made Ohio Families Homeless to the extreme Profit of State Pension Plans and Counties via Sheriff Sales that should never have occurred as Plaintiffs lacked Legal Standing to file foreclosures.

A Supervisor with The Ohio Attorney General’s Office actually called to tell me They Would Not Investigate Criminal Acts In Ohio Courtrooms and that Ohio Would Always Represent The Judges Against Me No Matter What They Did. She said, these are State of Ohio Judges…they work for us…not you Mr. Blake! I have it all on tape and a whole lot more evidence ready for Federal Court! I have evidence that can turn Ohio Politics and its corrupt Judiciary inside out. I am currently seeking Qualified Counsel for a Civil Rights, RICO and Tort Case in Federal Court. As you will discover, that should be quite interesting. This is a Pulitzer in the making. Just take a look at how Lisa Falkenberg won hers recently for Investigative Journalism.

Five Judges were recused from my case “for conflict” in common pleas Court, so The State of Ohio via Chief Justice of Ohio Supreme Court appointed Kelley Williams Bolar’s Judge who illegally circumvented Jury Trial as her first act. This Most Malicious Judge Patricia Cosgrove told me to file a Criminal Complaint against her. Believe it or not! That statement is on Court Record by Affidavit and was never disputed. During my Appeal Ohio refused to provide financial disclosures to prevent any more recusals for Undisclosed Financial Conflicts with the Plaintiff who was managing state pension funds. Ohio was required by both State and Federal Law to provide Financial Disclosures. That falls under election laws for just such occasions to prevent White Collar Crime.

Ohio’s concealment of financial disclosures and refusal to investigate substantiated allegations of such magnitude is further evidence of A Huge RICO Crimes Cover Up that Governor Kaisch’s Office refused to address! In my case multiple RICO Crimes were committed and the courts refused to examine evidence, permit discovery or allow case to go to Jury Trial as was scheduled and paid for in order to obscure the fact that Ohio was actively involved in crimes against its own residents. Again…Quote me or Prove Me Wrong! Six Judges actually scoffed at Blatant Violations of Civil Rights and The RICO Act that they were enabling in order to benefit their own retirement plans.

They totally ignored allegations of criminal acts in proceedings such as perjury, altered evidence and false statements by Plaintiff who held all Ohio Judge’s retirement funds during my own proceedings. They illegally circumvented trial and my Counterclaims even though my Motion from 2012 for Discovery and Depositions to this date is still outstanding. Amazingly they received an illegal judgment against me even though two Motions to Dismiss were not even responded to by the Plaintiff who had the Judges completely in their pocket. Coincidentally the Plaintiff BNY Mellon also had billions of dollars in business with John Kasich’s former employer, Lehman Brothers.

Know one thing: If I have no rights…you have no rights! They are wrong. They are breaking the law. I refuse to consent to their lawless disregard for YOUR RIGHTS OR MINE…no matter what! Look up “18 USC 242” “Deprivation of Rights Under Color of Law” on The U.S. Department of Justice or FBI’s websites. Who among you can afford to ignore Ohio's blatant disregard for truth, justice and civil rights. That is where America is headed as well with the likes of John Kasich. Please stand with me to make this case PUBLIC for the benefit of the generations to follow us who deserve every right so hard fought for since this once great county was formed.

THESE ARE THE ACTUAL COURT DOCKETS:
https://www.starkcountycjis.org/starkcrt/docket_frame?pass_case_number=2011CV03288&pass_case_type=CV