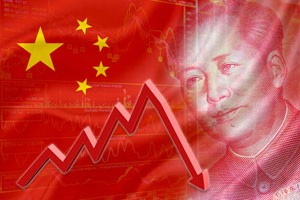 And the ramifications stretch far beyond just China. According to CIA Asymmetric Threat Advisor Jim Rickards, China's slowing economy will help usher in the next 25-year Great Depression in the United States.

Economists predict that China's economy will grow just 7% in 2015. That will be the nation's slowest growth rate in 25 years. As recently as 2012, China had double-digit growth.

Here's why that's so important for the global economy. In the 1990s, China's contribution to global growth averaged 10%. It has more than tripled to 34% this decade. Every year, the global economy has relied more and more on China's growth.

"We should be under no illusion that the really big thing in the world, which will have an impact on our living standards, is what happens in China," BBC Economics Editor Robert Peston wrote in December. "Nothing else really matters in comparison."

And while slowing growth in China is extremely concerning on a global level, there's an even bigger threat looming over China's stock market and economy...

Shadow banking refers to the process of state-owned companies borrowing from state-owned banks at the low interest rates set by the government. 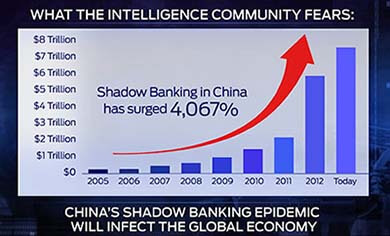 According to research from the Fung Institute in Hong Kong, shadow banking assets in China now represent more than 50% of the country's GDP. That's an enormous number. In the 2008 financial crisis, the United States had a shadow banking figure of 16%. And we all remember the collapse that created.

So what happens when the economy starts to collapse? There is a run on the banks. And when the bakers can't pay back their lenders, you have the next Great Depression...

"What does it mean when the world's second-largest economy hits the brakes?" Rickards said. "That's going to be disastrous to global growth; it's going to pull the rug out from under the sky-high valuations we're seeing in the U.S. stock market."

"This is a set-up for an entire collapse of the global economy."

And unfortunately, China's slowing economy and shadow banking practices are only one of the five catalysts that Rickards says will bring about a 25-year Great Depression in the United States. Find out what else will cause a global collapse, and how to protect yourself and your money before it's too late...

I'm interested in learning more about how to protect myself.

If you think money is goal in this world, you will totally miss the point and be suspect to general anxiety about money and how its moved around by global super powers.

This entire money morning website is meant for people who essentially worship money.

Wake up; realize this world is temporary and that investing in people is the only eternal investment.