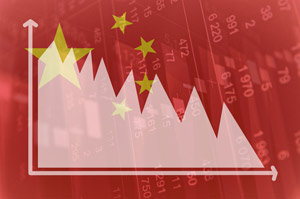 The drop comes after two consecutive days of gains for Chinese stocks. On Thursday, the Shanghai Index climbed 5.4%. It was up another 5% on Friday.

The biggest news today was the arrest of nearly 200 people for reportedly spreading false rumors about China's stock market in recent months.

The most high-profile arrest was that of journalist Wang Xiaolu, who writes for Caijing Magazine, a financial publication. China's state media said in a statement today that Xiaolu has been placed under "criminal compulsory measures for suspected violations of colluding with others and fabricating and spreading fake information on securities and futures market."

According to the state media, several government officials have been arrested for bribery and fraud. One of China's top investment banks, Citic Securities, saw four of its employees arrested today as well.

Global markets were also lower Monday after the drop in Chinese stocks. The Dow Jones Industrial Average dipped 92 points in early trading. The index is now down 7.2% in 2015.

While the markets ended last week on a high note, Money Morning Capital Wave Strategist Shah Gilani says we're not out of the woods yet.