Revised Apple stock price predictions have shares rising from 50% to 74% from its current level of about $115. 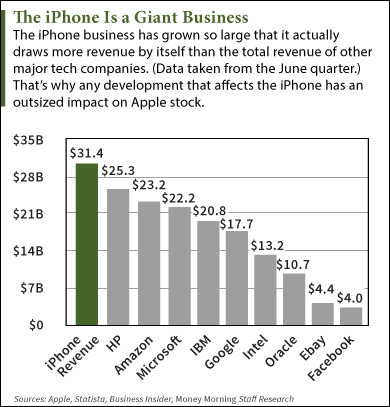 And what has analysts so excited isn't any of the new hardware Apple Inc. (Nasdaq: AAPL) announced last week, but a new way of selling the iPhone.

Such developments can have a huge impact on AAPL stock because the iPhone accounts for about two-thirds of the company's revenue.

Near the end of the Sept. 9 Apple Event, the company unveiled the iPhone Upgrade Program. Apple will essentially lease new iPhones for a monthly fee, starting at $32.41 for the least expensive model.

These iPhones will be provided unlocked so users can choose their own carrier. The iPhone Upgrade Program will help Apple stock in several ways.

It removes the concern of the carriers ending their phone subsidies while undermining customer loyalty to carriers like AT&T Inc. (NYSE: T) or Verizon Communications Inc. (NYSE: VZ). Instead, customers will be tied more tightly to Apple.

What's more, the program allows customers to upgrade to the latest iPhone every year at no extra cost. You need only trade in your old iPhone.

This provides an easy way for iPhone owners to make sure they'll always have Apple's latest and greatest. By cutting the normal two-year upgrade cycle in half, Apple will sell more iPhones to customers who want a new iPhone every year, while creating an inventory of more affordable iPhones it can sell in emerging markets as well as to customers on a budget in developed economies.

Amit Daryanani, an analyst with RBC Capital Markets, shared his math with Barron's. He figured that the average iPhone costs about $700 and costs the company $350 to produce – a 50% gross margin.

Daryanani's math is fatally flawed. To accomplish his extended trade-in Gross Margin of $884 requires the sale of TWO new iPhones. That increases COGS to $700 and reduces Gross Margin Percent to ~55%, IF Apple did not incur any costs handling/refurbishing the trade-ins. The deal is that Apple is not set up to handle this volume of trade-ins. I believe Apple has contracted with someone like Gazelle to manage refurbishment of these trade-ins. Whatever, Apple did not initiate this trade-in program to increase GM%, I believe it was done in order to offer the current world's most popular iPhone at a price point $100 to $150 below the price of a new iPhone 6/6 Plus (the new 2nd tier product post iPhone 6S launch) in emerging markets where the Galaxy S6 might be being considered by the consumer.

Think about it, you are a citizen of one of the BRIC countries and you are contemplating purchasing a smartphone. Do you buy a Samsung (or other manufacturer) Galaxy S6 (or equivalent) for ~$750, or a factory refurbished iPhone 6S (64GB) for $549?

There are still no guarantees Apple's share price will rise even a small amount if investors continue to stay nervous about iPhone sales in China. Investors simply have no faith in Tim Cook or Apple's ability to move products and it's really a pity.

I expect prices to continue to increase. Apple’s multiples are low compared to where many other tech companies trade. On a cash flow analysis too – I wouldn’t be surprised to see Apple trading at $135-$140 range. Here’s my DCF detail to support it: http://bit.ly/1FjS5W0