Today we're looking at how behavior leading up to and right after the Sept. 17 Fed decision has shaped our new silver price forecast. (Also check out our post-Fed gold price forecast.)

Silver tends to mirror gold's price movements, both up and down – but with leverage.

However, there's another factor most are underestimating in relation to silver prices. And although the Fed omitted any mention of it last Thursday, I believe it was central to their decision on interest rates.

It's like "rocket fuel" for precious metals – especially silver. Take a look…

Much like gold, silver prices started out the year strong, rallying from about $15.75 to $18.50. Here too, many investors hoped the cyclical silver bear that started in April 2011 was finally ending.

But by mid-March, silver had already corrected back to $15.50, erasing all those gains and even giving some back. 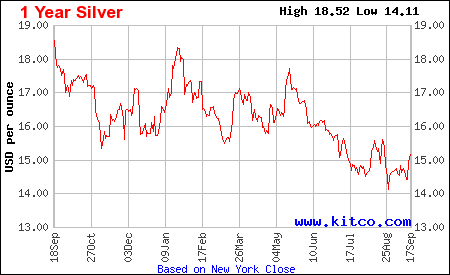 From there, silver moved sideways before selling off in mid-June. Silver prices touched a low of $14.11 by late August, when markets swiftly corrected.

That had the hallmarks of a capitulation, because it was a quick drop from $15.50 to $14.11. But silver recovered more than the market, and two weeks later had a small retest that brought it only to the $14.40 level. That appears to be a classic higher low.

Along with gold, this action just might have cemented the end of silver's nearly four-and-a-half-year correction.

Much like GDX, the gold miners and royalty ETF, SIL touched its lowest level ever, $6.04, intraday on Sept. 11. And yet strong buying came in and helped reverse the trend for SIL to close up at $6.33 for that day, 4.8% higher than that day's low.

Now let's compare what the SPDR S&P 500 ETF (NYSE Arca: SPY), silver, and silver stocks did in the trading week leading up to the Sept. 17 Fed decision.