Bernie Sanders' donations topped $26 million last quarter, as he continues his race for the Democratic nomination. That's just below the $28 million Democratic front-runner Hillary Clinton raised during the third quarter.

What makes Bernie Sanders' donations so astonishing is the average    size of each gift. 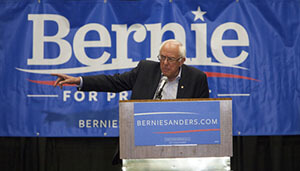 According to the Bernie Sanders campaign, the average donation size in Q3 was just $30. Campaign reps also said that 99% of all donations were smaller than $100.

In the last quarter, the Independent Senator from Vermont reported that 650,000 people had made more than 1.3 million donations.

One of Sanders' biggest messages throughout the campaign is that he does not accept money from "super PACs." Instead, he has relied heavily on online donations.

Sanders has followed a similar path throughout his political career. According to the Center for Responsive Politics, the biggest donation Sanders has received since 1989 is a total of $105,000 from the Machinists/Aerospace Workers Union.

The Bernie Sanders donations show how much of the U.S. public is shying away from politicians with endlessly wealthy supporters.

A Bloomberg Politics survey from September found that 78% of Americans want the Supreme Court's Citizens United decision overturned. The decision allows corporations to spend an unlimited amount of money on campaign donations "in support of political causes."

And the results from the survey were bipartisan. Roughly 83% of Democrats said they do not agree with the decision, along with 80% of Republicans. About 71% of independents were against the ruling.

The official Federal Election Commission (FEC) filings will not be published until late October, so we don't have donation totals on all candidates. But among Republican hopefuls, retired neurosurgeon Ben Carson reported an impressive $20 million in donations during Q3.

“Too many African-Americans today are simultaneously having to deal the crisis of racial justice while coping with the effects of poverty and economic deprivation, such as drugs, crime, and despair.”

“As Martin Luther King, Jr., said; Law and order exist for the purpose of establishing justice and when they fail in this purpose they become the dangerously structured dams that block the flow of social progress.”

“Across the nation, too many African-Americans and other minorities find themselves subjected to a system that treats citizens who have not committed crimes like criminals. A growing number of communities do not trust the police and police have become disconnected from the communities they are sworn to protect,” Sanders said.