Intel stock was holding steady at about $32 in after-hours trading.

Part of the reason for the beat was a better than expected performance from PC chip sales, which rose 13% from the previous quarter to $8.5 billion even though sales fell 7% year over year. It's an indication the new Skylake chips are gaining traction – a good sign for Q4 earnings.

The Data Center Group had the strongest showing with a 12% increase in revenue to $4.1 billion. The Internet of Things Group also did well, with revenue up 10%, to $581 million, from the year-ago quarter.

Intel earnings for Q3 2015 come out today among unenthusiastic expectations – but now's the time to be bullish on Intel stock (Nasdaq: INTC).
For the Intel Q3 earnings, Wall Street forecasts the company to earn $0.59 a share on revenue of $14.23 billion. That would be a 10.6% drop in EPS from the same period a year ago and a 2.2% decline in revenue. 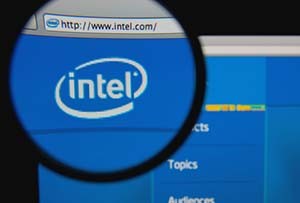 You see, Intel famously missed out on the mobile revolution and has paid the price in the past few years as PC sales have declined.

Now that strategy shift is on the verge of fruition, as more of the company's new chip technology finds its way into shipping products.

Over the past two years, the company has debuted these new chip initiatives, with two of the biggest coming this year.

As these new products gain traction among hardware makers, Intel's earnings will rise – and the INTC stock price along with it.

In fact, regardless of Intel Q3 earnings results today, there are four big reasons we're bullish on INTC stock now…

The Bottom Line: "I think this is going to be a transition quarter," said Money Morning Defense & Tech Specialist Michael A. Robinson. "It still might be weak in the fourth quarter, but I think what we're seeing is that they're really beginning to gain traction. They're doing a good job of moving into growth areas." Watch for Intel earnings for Q3 2015 to come out after the bell today.