According to a new report from Credit Suisse AG (NYSE: CS), the global wealth gap has grown to historic proportions.

The top 0.7% of adults by net worth now control more than 45% of the world's total wealth.

With those ranges, you can clearly see the how bad the global wealth gap has become: 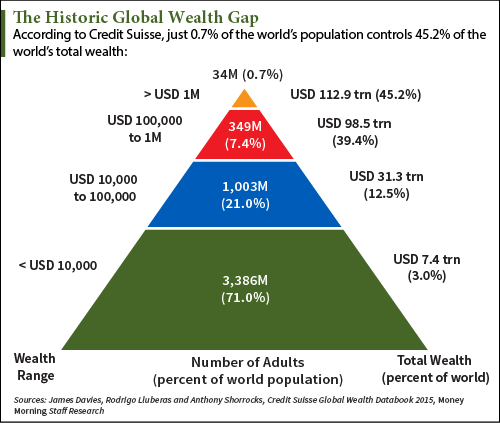 More than 3.3 billion across the globe have less than $10,000 today, according to Credit Suisse. That comes out to roughly 71% of the global adult population.

The problem looks even worse if you combine the top two brackets. After doing that, you find that the top 8.1% of the population controls an astonishing 84.6% of the world's total wealth.

What would be defined as the "middle class" in this chart shows that roughly 1 billion adults have between $10,000 and $100,000. That middle class controls just 12.5% of the world's total wealth.

"Discussions of wealth holdings often focus on the top part of the pyramid, paying little attention to the base and middle sections," the report said. "This is unfortunate because the latter segments account for USD 39 trillion of household wealth, which means they are of considerable economic importance. Addressing the needs of these asset owners can drive new trends in both the consumer and financial industries."

And while the wealth gap problem extends across the globe, the distribution of wealth in the United States is particularly troubling. Yes, the American middle class is shrinking at an alarming rate. Here's your proof...

A commentator whom I do respect, Rodger Malcolm Mitchell, says;
"Everything in economics devolves to Motive, and the motive is the gap between the rich and the rest."
Again; " The single most important problem in economics is the Gap between rich and poor".
Also; " Until the 99% understand the need for Federal Deficits the upper 1% will rule"