The IBM stock prediction for the rest of 2015 is not exactly what investors want to hear - but there is a promising development taking shape ...

International Business Machines Corp. (NYSE: IBM) will announce Q3 earnings today (Monday) after the bell. Investors are worried about how IBM stock will move post-earnings because the company has reported 13 straight declines in quarterly revenue. 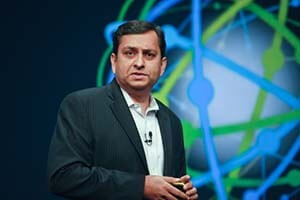 One problem is this technology giant's software division is the biggest contributor to the IBM stock value, according to Forbes. And in the last IBM earnings report, software revenue fell to $5.8 billion from $6.5 billion from the same period a year before.

One reason for the decline is the company is transitioning into the booming cloud computing industry. Research and analytic company IHS Technology projected that enterprise spending on cloud computing will be $235.1 billion in 2017. That's more than triple the $78.2 billion that was spent in 2011.

But that's not enough to appease IBM shareholders, who are getting antsy. Reuters reported in April that IBM shareholders wanted help from activist investors like Bill Ackman to help unlock more IBM stock value.

While the latest earnings report is unlikely to show a revenue reversal, there is one program that IBM wants to focus on to drive earnings growth - and to encourage more bullish IBM stock predictions...

In 2015, IBM made a $1 billion purchase into a new business unit for its supercomputer system. IBM described this system as the biggest innovation to date.

Executives believe this supercomputer could generate $1 billion of revenue by 2018.

Money Morning readers may have first learned about this potential billion-dollar generator on "Jeopardy" in 2011...

You are very long-winded and repetitive in your commentaries. People engaged in doing something in life do not have the time or the inclination to be continually indoctrinated. Get to the point efficiently. Your target audience is only retirees?

I totally disagree with David, Gary and Ilka! The more INFO/INTEL the better! A prudent investor should always be skeptical and should demand to be convinced of specific play! There is no such thing as "sure thing!" If these guys want to "day trade", they should get their INFO/INTEL from like minded automatons!