When the Q4 Apple earnings are announced Tuesday after the market close, the company won't be breaking any records.

That's because Apple Inc.'s (Nasdaq: AAPL) quarterly earnings follow a very consistent pattern from one year to the next. The Q1 Apple earnings - the quarter we're in right now - is always the biggest for the company. The Q2 AAPL earnings are the next best. 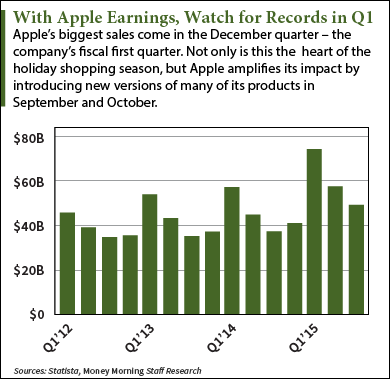 Apple investors need to know why this happens, as following this pattern is a key part of understanding where Apple stock is likely to go next.

The main reason the best Apple earnings fall in the December quarter is because Apple gear - iPhones, iPads, Watches, and iMacs - make for great holiday gifts.

Still, abnormally high earnings in the December quarter is a pattern you more often see among retailers than consumer tech companies. For example, Amazon.com Inc. (Nasdaq: AMZN), Macy's Inc. (NYSE: M), and Kohl's Corp. (NYSE: KSS) all get about a third of their annual sales from the December quarter.

Apple earnings match that - for the past three years, Apple has made just under 32% of its total annual revenue in the December quarter. Other consumer tech companies, such as rival Samsung Electronics (OTCMKTS: SSNLF), don't see nearly as much of a seasonal bump.

But the sales-heavy December quarter isn't just due to holiday shoppers. Apple amplifies the effect by introducing new versions of many of its products in the September-October period.

That, along with relentless marketing, ensures that Apple's shiny news toys are top of mind when people are writing out their shopping lists. The desirability of Apple devices and relatively high cost also make them popularly requested items.

Many new Apple products debut late in the company's Q3 (the quarter that ends Sept. 30). This year, the big Apple event was held Sept. 9 and introduced the iPhone 6S, the new, bigger iPad Pro, and a new Apple TV.

But here's why the impact of these new devices is rarely felt until the Q1 Apple earnings period...

Why the Q1 Apple Earnings Matter Most

The iPhone didn't go on sale until Sept. 25, and Apple is only counting two days of iPhone sales in the Q4 AAPL earnings we'll get Monday. The iPad Pro won't be available until November, and the new Apple TV, according to Apple's website, is "coming soon."

So while we saw Apple's new wares more than a month ago, we won't get a real idea of how well they're selling until the third week in January, when Apple reports its Q1 earnings.

That's how it always happens. And it means the Q1 Apple earnings are the most telling of the year - the quarter investors need to watch the most closely.

If the new models - especially the new iPhone models - have a strong debut in Q1, it bodes well for the following quarters. And it typically heralds a record-breaking quarter.

Back in January 2012, for example, Apple stunned Wall Street with a 73% increase in revenue and profit that more than doubled year over year. Those amazing AAPL earnings were attributed to blockbuster sales of the iPhone 4S, which featured the addition of the Siri voice assistant.

This past January, the popularity of the larger screens of the iPhone 6 resulted in another huge earnings beat. Revenue was up 30% year over year and profits up a remarkable 48%. Apple not only recorded the most profit in its history, but the most profit by any company ever.

Conversely, a weak Q1 suggests more weakness in the ensuing quarters. And that will sour investors on AAPL stock.

So going by this pattern, the Q4 Apple earnings are the least important, as it's the last quarter of the previous year's product cycle.

But with some of the new Apple products already on sale, CEO Tim Cook might offer some insights on how well they're doing in Tuesday's conference call with analysts. If nothing else, we'll get a hint from the company's Q1 guidance.

Carl Icahn Still High on AAPL: Recently, Carl Icahn went on CNBC to declare that Apple stock is "ridiculously underpriced." But that's not all the legendary activist investor, who owns 53 million shares of AAPL stock, said. He also gave a full-throated case for why he thinks AAPL stock is such a good value right now. Here's why Icahn would like to buy even more Apple stock...