The People's Bank of China (PBOC) trimmed its benchmark lending and deposit rate by 0.25% each. They are now at 4.35% and 1.5%, respectively. Both will be effective Saturday. China's interest rates have now been cut six times since November 2014. 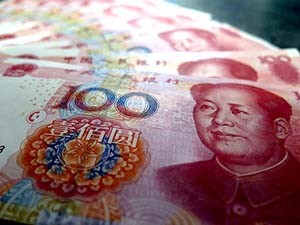 Data released Monday showed China's economic growth rate was 6.9% in Q3. That was the first time it slipped below 7% since 2009. The slowing growth raised doubts that China will be able to reach its official target growth rate of 7% for the full year. China hasn't logged a full-year growth rate less than 7% in 25 years.

That slowing growth has investors around the world taking notice…

The Chinese economy has been responsible for nearly one-third of all global growth over the past seven years.

With Chinese imports in September slipping for the 11th consecutive month, and producer prices stuck in deflation for three years, boosting China's economy won't be easy.

China's central bank is committed to stimulating growth, however. Here are the moves the PBOC has taken recently, including cutting Chinese interest rates…

Good morning!
I have been hearing that China Housing and Land (CHLN) is worth taking a look at, but can't find anything about it on your site. Any advice?