This week I heard from a reader with a question I bet is on every investor's lips.

Q: Michael, Excellent written article ... However, I am curious on your "take" as we move into fall and December - What about the notorious "Christmas rally"? ~ James B.

A: James, the S&P 500 has rallied a remarkable 13% in the last five weeks, recapturing all of its summer losses. The Dow Jones Industrial Average jumped by 8.5%, while the S&P 500 soared by 8%, and the Nasdaq Composite Index outdid them both with a 9.38% performance. Even more noteworthy is that the three major indices have done this in the face of unrelentingly poor economic data. (More on that in a minute.)

So it's no surprise you're wondering, as we sit here in the first week of November, whether Santa Claus came early or whether the market will keep "melting up" through the end of the year. And I bet you're not the only one.

Here's the number I'm looking at... 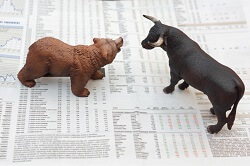 As I told you last week, nobody expected the type of market rally we saw in October.

But here's what people are missing.

Twenty percent of the gain in the S&P 500 in October was accounted for by a near $300 billion rise in the value of just four stocks - Amazon.com Inc. (Nasdaq: AMZN), Apple Inc. (Nasdaq: AAPL), Microsoft Corp. (Nasdaq: MSFT), and Facebook Inc. (Nasdaq: FB).

In fact, the only bright spot has been the strong earnings reported by a select number of large-cap tech giants like these. The rest of the earnings landscape has been lousy.

While other stocks did gain ground, including beaten-up energy and industrial names, much of the market remains in a stealth bear market with year-to-date losses of 20% or more. And while the market had a great month in October, many of the big-name hedge funds had catastrophically poor months and are nursing double-digit losses for the year.

Unless you own the limited number of stocks that are rising, you are not participating in this rally.

The reason why the rally is so narrow is that its underpinnings are extremely weak. Basically, the market moved up as economic data deteriorated through the month. Third-quarter U.S. GDP came in at an anemic 1.5%. The manufacturing PMI number came in at 50.1, a number that points toward recession. The last two times this number hit 50, the Fed initiated QE in 2011 and 2012. The news from abroad isn't any better. China's economy is getting worse, not better, while Japan remains stuck in terminal decline and Europe is struggling while it waits for another round of QE from the ECB. Corporate earnings are weak because the economies in which corporations are operating are weak domestically and globally.

But investors, being a herd-driven and Pavlovian bunch, decided to stick to the old playbook of "bad news is good news" in October. The worse the news got, the more they believed that central banks would come to their rescue again. The only problem with this scenario is that central banks have not come to their rescue; these confederacies of dunces with economist Ph.Ds. have merely propped up weak economies by drowning them in more debt that can never be repaid. The longer they keep interest rates at zero and print more debt, the longer it will take for economic recovery to occur.

So what does this mean for stock market investors?

Very interesting, I've never quite thought of it in that way. It's certainly something I'm going to keep in mind when the market opens on Monday.

Michael- Interesting article/ perspective. I personally believe the "next leg" will be provided by FANG and retail; even going through 2016

So 4 stocks accounted for 20% of the recent market rise. That means a broad group accounted for the other 80%. The question remains how many stocks were on the plus side. If it was a majority, the gains seem to have some legs. If a minority, then the market strength is questionable. The low PMI number, combined with the way so many large manufacturers have been laying off workers and often shuttering plants and reducing CAPEX, is more worrisome to me. Some, especially in Energy, have even resorted to borrowing to continue paying dividends, and this is actually a frightening sign of poor management. 1937 again?

The real answer is what would like it to be