Oil and natural gas companies have taken a terrible beating this year. The NYSE Oil & Gas Index is down 11.8% in 2015. WTI crude oil prices and natural gas prices have crashed 30.4% and 37.8% over the same period, respectively. 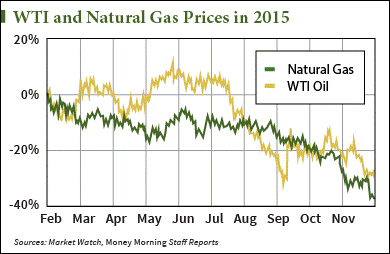 Global warming will be in focus this week as United Nations members discuss the problem and possible solutions at the COP21 climate change summit in Paris this week.

Since 2009, the UN has aimed to limit the future increase in the average global temperature. Leaders of 150 UN countries meet every year to discuss how to institute laws geared toward reducing greenhouse gas emissions. According to the COP21 website, the goal of this year's conference is to "achieve a legally binding and universal agreement on climate, with the aim of keeping the global warming below 2°C."

The United States has taken urgent action to reduce greenhouse gas emissions by limiting coal production. By the end of 2015, coal's share of power production will be only 35.6% - down from 38.7% in 2014.

But coal isn't the only problem. According to the U.S. Environmental Protection Agency (EPA), the burning of coal, natural gas, and oil for electricity is the largest single source of global greenhouse gas emissions. Since the United States started producing record levels of oil and natural gas last year, it has become the second-largest emitter of greenhouse gas emissions.

Despite these warning signs, oil and natural gas companies are still projected to spend $1.96 trillion on drilling projects over the next five years.

All of this means U.S. oil and natural gas companies may spend trillions on an industry with dwindling demand. According to Carbon Tracker Initiative, a nonprofit specializing in carbon emissions research, global warming will cause oil and gas demand to peak around 2020 due to the UN's goals.

That could exacerbate the debt and declining profits firms have endured from the crash in energy prices.

"Too few energy companies recognize that they will need to reduce supply of their carbon-intensive products to avoid pushing us beyond the internationally recognized carbon budget," James Leaton, head of research at Carbon Tracker Initiative, said in a statement.

But according to Money Morning Global Energy Strategist Dr. Kent Moors, there are bigger forces at work that will lift natural gas prices. And they are all quickly ushering in a new era of the global natural gas market.

"'Brave New World' is going to be an understatement," Moors said back in August. "Please understand the importance of what we are rushing into: nothing less than the emergence of an integrated global natural gas market."

According to Moors, new forms of natural gas consumption will boost demand and prices to record highs in the coming decades. This will open up a plethora of profit opportunities for patient energy investors.

His natural gas price forecast is fueled by these three "game changers" that will transform natural gas investing forever...

Alex McGuire is an associate editor for Money Morning who writes about energy. Follow him on Twitter for all of the biggest updates on oil and natural gas companies.

Hope it is true.