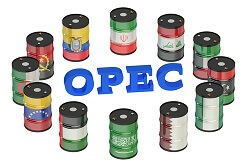 That's the biggest question on energy investors' minds ahead of the cartel's meeting this week. On Dec. 4, oil ministers from OPEC's 12 nations will congregate in Vienna to discuss the state of the oil market moving into 2016. Heads will be turned toward Saudi Arabia, which has led the cartel's policy of overproduction to maintain market share even as oil prices hover near $40 a barrel.

The Organization of the Petroleum Exporting Countries has historically been stubborn toward lowering output. At the last meeting on June 5, the cartel said it would maintain its collective production of 30 million barrels a day. The announcement was the second time since November 2014 the cartel aimed to lower global prices to edge out competitors rather than stabilize the market.

Now OPEC is desperate, as this year's 30.5% crash in oil prices hurts many oil-rich cartel members.

"OPEC members like Venezuela, Nigeria, Libya, Ecuador, and Iran are experiencing significant financial constriction," Money Morning Global Energy Strategist Dr. Kent Moors explained last month. "Because the cartel members are all dependent upon oil sales and run undiversified economies, the collapse in crude prices hit every one of them hard."

Venezuela's economy is struggling the most from Saudi Arabia's high-volume initiative. From September 2014 to November 2015, the country lost roughly $36 billion in oil export revenue. Back in August, Venezuelan oil officials contacted Mohammed al-Sada - Qatar's oil minister and president of the OPEC conference - to figure out a way to both stabilize prices and protect market share.

But other large OPEC members like Saudi Arabia and Kuwait are mainly concerned with Russia's cooperation. The Saudis have tried to establish healthy relations with the non-OPEC member for years. That's because they want a piece of Russia's massive oil reserves and geographic dominance. After all, adding Russia to the OPEC roster would increase the cartel's global market share by 33%.

The Saudis have repeatedly said lowering production would be pointless if Russia refuses to establish a rapport. If Saudi Arabia keeps it up, the OPEC countries on the verge of economic collapse might start fighting back.

"A transition of the crisis to the political realm would mark the beginning of a Latin American parallel to the Arab Spring," Moors explained.

With all of this dissension among OPEC's ranks, people are wondering if OPEC will cut oil production at the Dec. 4 summit.

Here's the one factor OPEC's decision hinges on...