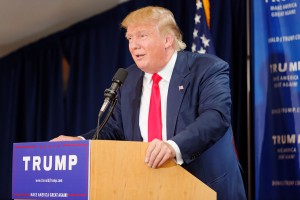 Trump campaigning at the Laconia Rally in New Hampshire.

GOP presidential front-runner Donald Trump has been criticized by politicians and citizens alike for his controversial comments.

Just on Monday, dozens of black pastors rallied at his midtown Manhattan high-rise to raise concerns about his blunt language and what some describe as racially charged rhetoric. Indeed, on Nov. 20, Trump's wife Melania told Barbara Walters in an interview that she thinks her husband could stand to dial it down a notch.

Is Melania right – should Donald Trump tone it down?

Should Donald Trump Tone It Down? Survey Says…

A new Quinnipiac University survey released this morning indicates Trump is the first choice of 27% of Republican primary voters nationally. It's his best poll performance since August, and a three-point increase from last month.

"It doesn't seem to matter what he says or who he offends, whether the facts are contested or the 'political correctness' is challenged, Donald Trump seems to be wearing Kevlar," said Tim Malloy, assistant director of the Quinnipiac University poll, according to Business Insider today.

Malloy couldn't have put it better. Trump does seem impenetrable in the wake of his own rhetorical fallacies. He even has a routine for it, The Washington Post pointed out earlier today. "[He] says something controversial or incorrect, reporters ask him about it, and instead of reconsidering his choice of words or tone, he doubles down."

Only two instances of late might suggest Trump is trying to tone it down, noted the WSJ:

Indeed, if we are about to see a "more diplomatic" Trump in the coming months, we'll want to keep an eye on his ratings…

A cooler, calmer Trump may not settle well with his support base, because right now his surge in polls reflects voters prefer the fired-up, bombastic version.

Let us know what you think: Should Donald Trump tone it down? Find us on Twitter @moneymorning and on Facebook.

Last Tuesday Senators Chuck Grassley (R-IA) and Dick Durbin (D-IL) has commenced legislation to contain the exploitation of temporary work visas and disallow “the replacement of American workers by H-1B or L-1 visa holders.” This is a bipartisan bill S 2266 would give supplementary authority to the Labor Department to punish falsified or abusive conduct and would limit larger IT companies from applying for H-1B visas if more than half of their workers are already on H-1B or L-1B visas.

This New legislation will prohibit businesses from dismissing trained American workers and then replacing them with foreign H-1B and L-1 visa workers.

This will assist in solving the disgusting status quo, in which tens of thousands of high-skilled American workers are being displaced by cheap imported labor annually. In addition they are deliberately abusing the visa system, as it's found that many companies have even been blackmailing American workers into training their foreign replacement and then threatening them not to discuss their terminations with the media.

Once Donald Trump is inaugurated as President there would be a massive reorganization in every agency, removing the ones that are non essential to the running of government. Probably first on the list will the archaic Department of Education and return it to control back to the individual states as originated. The EPA Environmental Protection Agency will be run by the states, so that the overreach of government abundant rules and regulation can be restrained, which is a continuously derogatory to the business world.

Donald Trump keeps rising because voters see him as genuine, pro-sovereignty, unswerving, solid, — and trust him because the wealthy and unique interests cannot buy his allegiance.

Illegal immigration will be brought eventually to an abrupt halt, by the Trump wall going up along the Southern border, creating safer surroundings for land owners, US Border Enforcement, and the limited resources of county Sheriffs. Land areas in Arizona appropriated by drug cartels, skin traffickers and other criminal activity will leave or be eliminated by most likely armed National Guard.

The interior of our country controlled by ICE agents will operate MANDATORY E-VERIFY system a program to evaluate who is authorized to work and who hasn't proved their right to work in the United States and its protectorates. Without mitigating circumstances business owners who ignore could/would have their business license revoked, a heavy penalty, and even time behind bars. Once business owners no longer have the shield of politicians who are the purchased puppets of U.S. Chamber of Commerce, corporate and special interests, they have no protection or immunity.

Mandated E-Verify is a stringent alternative to trying to amend the Birthright Citizenship law that most likely would be a drawn out war in the courts. So even though Donald Trump would proceed with repealing this part of the 14th Amendment and the Anchor Baby law Mandatory E-Verify could have a fast track through the federal courts. Most industrialized nations have ended Birthright citizenship to illegal alien women other then Canada and the US.

The Corruption Files on the Judicial Watch site, does not hide the truth about corruption, or make any distinction on the federal payroll, or any level of government. Judicial Watch motto is "Nobody is above the Law." Although personally I believe Barack Obama, Hillary Clinton and many other politicians think they can walk all over the Constitution and the people. That also goes for many in the Republican Establishment including Bush who can also be guilty taking bribes from wealthy donors. This government under Obamas rules and regulation has shown it to be utterly trustworthy.

The mainstream Progressive Liberal Press is going to exaggerate the truth, outright lie or just omit bits of the presidential statement.

Illegal Aliens Sue to Drive, Claim Discrimination of “Disfavored Minority Group” — Borrowing a play from the Obama administration’s extensive race-card repertoire, illegal immigrants claim in a federal lawsuit that a ballot measure denying them driver’s licenses is discriminatory because it’s based on… READ MORE.

Judicial Watch Files New Lawsuit for Clinton’s Benghazi Emails on behalf of Dr. Larry Kawa — Judicial Watch announced that it filed a Freedom of Information Act (FOIA) lawsuit against the Department of State seeking all records of communications between former Secretary of State Hillary… READ MORE.

I couldn't believe my eyes and eyes, with this smug Immigration Chief Sarah Baldana today sat before an immigration, criminal and deportation committee of Jeff Sessions, and Senator Ted Cruz. She showed her true colors of not following federal immigration laws and under the King Obamas orders releasing back into unsuspecting society 179.000 criminal illegal aliens roaming free with many who have committed murder, sexual assaults, and other heinous crimes. For me the Kate Steinle murder in Sanctuary City California is not going to fade away if I can help it? But now we are confronted by a new murder of an American Citizen in Pennsylvania, and it will be passed on to my readers when I know more. Sacrifice a few minutes and type in (CAPS Immigration) and learn more of what Washington is not telling us?