On Monday, the Chinese yuan joined one of the most elite clubs on the planet: the International Monetary Fund's Special Drawing Rights basket of reserve currencies.

Scheduled to take effect next October, the yuan will be weighted at 10.92% - greater than fellow basket members the Japanese yen and the British pound, but less than the euro and the U.S. dollar.

Earlier this year on Aug. 4, the IMF said China would have to move ahead with market liberalization before it would allow the yuan in. The currency's inclusion this week shows the organization is happy with China's progress. IMF Managing Director Christine Lagarde said the yuan's inclusion was based on "a clear indication of the reforms" China has carried out.

What It Means to Be a Global Reserve Currency

Reserve currencies are held in significant amounts by governments and institutions around the world in order to help conduct transactions in the global market.

Designation as a global reserve currency sends a message about a currency’s economic heft to the rest of the world. To be in this VIP club, a currency must be “widely used,” “widely traded,” and “freely usable,” according to the IMF.

"The continuation and deepening of these efforts will bring about a more robust international monetary and financial system, which in turn will support the growth and stability of China and the global economy," Lagarde said in Monday's statement.

Of course, the IMF could be dead wrong.

"From a practical position, the IMF expects China will have to make its currency more 'freely tradable' than it is - which, along with being a 'major exporter,' is the other criteria the IMF considers in conferring reserve status on a currency," Money Morning Capital Wave Strategist Shah Gilani said on Monday. "But there's a possibility the IMF jumped the gun on this."

The Chinese Yuan Is a Dangerous Wild Card 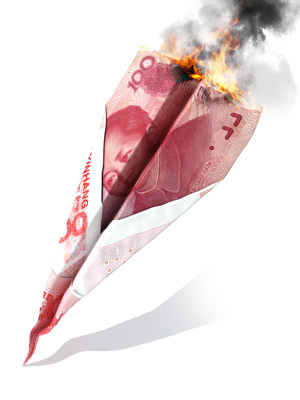 "If China lets the yuan adjust to other major currencies by purely market forces, which none of the other reserve currency countries - the U.S., Great Britain, the European Monetary Union, and Japan do - the IMF may get a shock it's not prepared for. And I mean a major shock," Gilani said.

We all saw what happened in August. People's Daily, the Communist party's mouthpiece, declared Aug. 24 "Black Monday." The Shanghai Composite closed down 8.5% that day - the benchmark index's worst single-day fall in eight years.

The pain radiated outward from there.